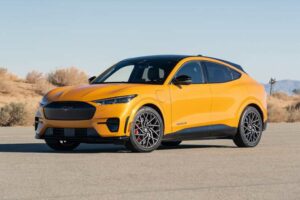 To meet demand for its popular electric vehicles and support ambitious future plans, Ford announced its latest moves to increase its capacity of batteries and supply of raw materials to make it happen, though layoffs could be looming. The initiatives are designed to enable Ford to produce 600,000 vehicles a year by late 2023 and more than 2 million by the end of 2026. Last year Ford sold less than 28,000 battery-electric vehicles but is spending $50 billion to become a leader in the EV space.

And the automaker has been flooded with demand it cannot meet. Consumers face long waiting times for the Mustang Mach-E electric SUV and the F-150 Lightning electric fullsize pickup truck. Ford has had to close order books as it works to increase production. The automaker makes about 2,000 Mach-Es a week now, but the run-rate will double next year when Ford retools to dedicate the entire Cuautitlan, Mexico, facility to the electric Mustang next year.

Here is the production breakdown to reach the 600,000 global EV run rate:

Ford says it has the 60 gigawatt hours needed to support the first part of the production plan—600,000 EVs a year, and has already sourced 70 percent of battery capacity needed to meet 2026 targets of 2 million EVs a year.

Importantly, Ford is adding a second battery chemistry: lithium iron phosphate or LFP to its portfolio, in addition to its current nickel cobalt manganese (NCM) chemistry. LFP reduces the reliance on scarce minerals and comes with a 10-15 percent cost savings, a key step to making vehicles like the Mach-E profitable, something that has slipped with higher material costs. Battery costs is where the war will be won in the short-term, said Lisa Drake, Ford Model E vice president, during a call with investors and media.

Contemporary Amperex Technology Co. (CATL) will provide LFP battery packs for the Mach-E in North America starting next year and for the next-generation Lightnings coming in 2024. To meet the 2 million production goal, Ford and CATL are looking for additional ways to supply more batteries in China, Europe, and North America. The location of a new CATL plant has not been announced yet.

To increase supply of the NCM batteries needed now, LG Energy Solution has doubled capacity in Poland to supply more of batteries for the Mach-E and E-Transit. And SK On has installed more capacity of NCM batteries for the Lightning and E-Transit now and will add another joint-venture plant in Turkey. Ford plans to have local battery cell capacity in North America—40 gigawatts worth—starting in 2026. This is in addition to the three battery plants already planned in Tennessee and Kentucky, says Drake, who would not provide further specifics.

To get the raw materials needed, Ford is working to source more in North America as it works to build a new EV supply chain. The automaker is working with companies that mine and source materials around the world, including Canada, Indonesia, and Australia, and has plans for a cathode production facility in North America.
The automaker is also working to address issues with the charging infrastructure. Customer feedback shows only 95 percent of public charging attempts are successful and 20 percent are frustrating. Drake says the company is working to get more real-time information about stations to customers. Reliable charging is key to supporting fleet customers, as well.

All these initiatives are part of the Ford+ plan which requires the elimination of $3 billion in annual costs by 2026 to free up the capital needed to transition to electric vehicles. Ford CEO Jim Farley wants the company to achieve a 10 percent profit margin by 2026, up from 7.3 percent last year. Farley wants EVs, which are more expensive to produce because of the battery pack, to have an 8 percent profit margin by 2026. This is critical to profitability as the automaker wants more than half of its global production to be EVs by 2030.

Ford officials on the media call would not comment on media reports that Ford plans to cut thousands of white-collar workers, many of them associated with the legacy side of the business that makes vehicles with internal combustion engines. Salaried workers in sales, marketing, engineering, and corporate functions, will be let go, according to Bloomberg and The Wall Street Journal. Factory workers are not expected to be affected.

Ford in March announced plans to divide the company into two divisions. Ford Blue employees are focused on EVs and software-defined vehicles and other future technologies while Ford Model E employees continue to work on traditional gas- and diesel-powered vehicles which still represent the majority of sales and generate the profits needed to finance EVs. Farley has said previously that the legacy side of the business has too much complexity and that many of the legacy workers do not have the right skills to move to the EV side of the business.