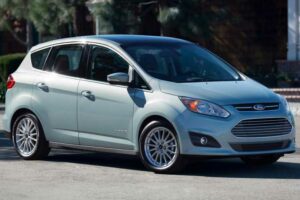 Ford will have to pay $19.2 million as compensation for allegedly falsely advertising real-world fuel economy and payload capacity for some of its hybrid and truck models. While the automaker did not admit wrongdoing, it announced it is pleased to see the issue “closed without any judicial finding of improper conduct.”

The settlement with 40 states and the District of Columbia comes following allegations that 2013-2014 C-Max hybrids and 2011-2014 Super Duty trucks were falsely advertised. The agreement prohibits Ford from making false or misleading claims in advertisements regarding estimated fuel economy or payload capacity in the future.

According to Acting New Jersey Attorney General Matthew Platkin, Ford did not provide accurate information regarding the distance consumers could travel on a single tank of fuel in the C-Max hybrid and claimed superior actual fuel economy numbers compared to other hybrid models. Platkin is referring to the Hybrid Games advertisement campaign, in which a C-Max outperformed a Toyota Prius in a series of promotional videos. Ford was convicted of using a deceptive methodology in this campaign.

As far as the Super Duty is concerned, Platkin accused the automaker of using “a truck configuration it did not actually intend to sell to individual buyers” to gain a best-in-class title for payload. Ford allegedly used a truck “that omitted such standard items as the spare wheel, tire and jack, radio, and center console, which was replaced by a mini-console.” In turn, Ford said that it “worked with the states to resolve their concerns and in the process limited additional investigative costs and legal expenses for all parties.”

As a reminder, last year, Ford recalled about 12,000 F-350 trucks from the 2020 model year because they were sold with incorrect payload figures. Ford then said these trucks may have been overstated by 78 to 900 pounds. Just recently, the company announced a massive 600,000-vehicle recall for certain F-Series, Expedition, and Lincoln Navigator models over faulty windshield wipers.