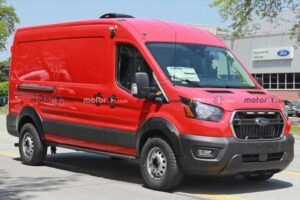 Ford doesn’t offer its beefy Transit Trail all-wheel-drive van in the United States. It’s a vehicle for the European market, but questions were raised back in February about a version destined for the States. Now, we have strong evidence supporting the theory with this red test van, which isn’t a typical U.S. Transit currently available. At the same time, it doesn’t have Euro-spec features.

It’s impossible to miss the all-wheel-drive underpinnings of this model. Aside from the ride height and all-terrain Goodyear Wrangler tires, an AWD badge is clearly visible on the rear door, mounted just above an EcoBoost badge. Clearly we aren’t dealing with a janky test mule, and Ford doesn’t seem interested in hiding the van with camouflage. This looks like a production-ready machine – there’s even what looks like a Monroney sticker on the windshield.

Couldn’t this be an updated European model spending some time in Michigan before heading across the pond? Possibly, but this van wears a different grille that nixes Europe’s bold FORD lettering in favor of a traditional oval badge. That falls in step with Transit styling in the U.S., and it also has larger cladding over the wheel wells. Marker lights in the grille and on the sides are also new features, likely installed because this is a larger 250 model. A Transit 250 badge is clearly visible on the back door, and that could be the smoking gun because the European Transit Trail is based on a smaller 150.

There’s no question that larger, rugged vans are in-demand as the RV market continues to expand rapidly. The existing RWD Transit is already widely used in camper upfits, but more aggressive overlanding vans for US customers generally fall to the Mercedes Sprinter thanks to its AWD capability. With some RV companies reporting billions of dollars in backlogged orders, a Transit Trail on the 250 chassis with Ford’s advanced AWD system could capture a bigger slice of that lucrative market.