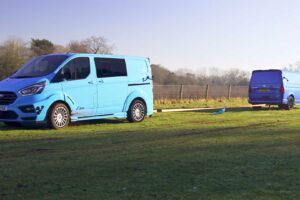 A vehicular tug-of-war battle is basically professional wrestling for the automotive world. It starts with two opponents strutting about, maybe with a bit of trash talk tossed in for good measure. The fight is really just a good, choreographed show for the crowd. The results of the match have very little to do with the actual capabilities of the performers. And the spectators absolutely love it.

Case-in-point is this recent video from Carwow, featuring a Ford-versus-Mercedes-versus-Volkswagen showdown of – wait for it – front-wheel drive diesel-powered vans. Folks, this is arguably the least exciting vehicle segment of them all, and yet, we can’t look away as these vans are tied together and turned loose on a slippery grass surface. The only thing missing is a Fiat Ducato jumping into the mix with a steel chair ready to clobber the Ford.

Speaking of which, let’s take a closer look at the competitors. The Ford Transit is clearly the babyface of the bunch, dressed up in sporty MS-RT trim with a body kit, 18-inch wheels, and a fake V8 soundtrack over its 2.0-liter diesel engine. It checks in with 184 horsepower (137 kilowatts) sent to the front wheels through a six-speed automatic transmission. The Ford’s first match is against a mild-mannered Mercedes Vito with a 134-hp (100-kW) 1.8-liter diesel and a six-speed manual. It gets no body kit, no fancy wheels, or even no windows for that matter. Based on appearance alone, it’s destined to lose this match.

And lose it does, though if we’re honest, it’s not a terrifically exciting showdown. Placing front-wheel-drive vehicles with street tires on a damp surface and roping them together is a recipe for wheelspin, and that’s primarily what we get. The Transit eventually wins because apparently, traction control on the Mercedes couldn’t be turned off. In the wrestling world, it’s basically an out-of-the-ring count-out.

That leaves the flashy Transit to face down the fearsome Volkswagen Transporter. In this case, fearsome means a 2.0-liter diesel with 206 hp (154 kW), driven by a seven-speed dual-clutch automatic. The VeeDub also has some flash of its own with red trim and 18-inch wheels, but we already know how this match will end. The heroic Transit mercilessly pulls the VW across the grass for a 1-2-3 pin. With sharp looks and less power, it had to win.

Will we get a Ford-versus-VW rematch in Wrestlemania? Only if the video view count is high enough, brother.