Ford Takes Jab At Dodge Over Do Not Disturb Mode 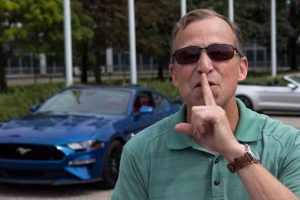 The Mustang has had it for years.

For April Fool’s Day, Dodge tweeted about creating a Do Not Disturb mode for SRT models that would quiet them down to keep from bothering people. While it was just a joke, Ford Product Communications Manager Mike Levine noticed and used the post as an opportunity to promote the Mustang. The Blue Oval’s pony car has had a Good Neighbor Mode since 2018.

The system arrived on the 2018 Mustang GT. It used the active exhaust system to muffle the sound out of the pipes. Ford even included a programmable timer that could automatically hush the noise at certain times. A quiet start setting was also part of the tech.

The idea for the system came from Steve von Foerster, Ford’s former head of vehicle engineering. He was backing a Mustang Shelby GT350 out of the driveway one morning when a neighbor called the cops because of the sound. He turned the bad experience into something positive by coming out with Good Neighbor Mode.

The feature probably isn’t enough to convince someone to buy a Mustang over a Challenger, but it’s definitely something that’s nice to have. If someone frequently comes home late or leaves early while people are sleeping inside, then the muffled exhaust setting would be nice to have.

A loud Mustang might not be a problem for much longer. The next-gen model reportedly adopts a hybrid-assisted V8 in 2022. The setup allegedly lets the engine turn the rear wheels and electric motors power the front axle. While there aren’t many details yet, it’s conceivable the car could run quietly with the ICE off for an even more effective form of Good Neighbor Mode.

If you’d prefer something even quieter, then a fully electric Mustang is reportedly on the way. A rumor suggests it goes into production in December 2028, suggesting sales starting in 2029.