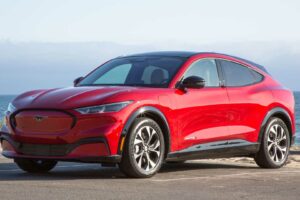 According to Car and Driver, the Mustang Mach-E offers a solid balance of range and performance.

C & D notes that the Mustang Mach-E has a sought-after balance of range and performance, but there are many other reasons it deserves the award. The publication writes:

“It arrives in the familiar shape and size of the crossovers Americans love, at a price that competes with gas-powered alternatives, and with a design that gets noticed.”

Folks were skeptical about Ford using the Mustang name for a four-door electric crossover, but it seems to have worked as planned. Next up is the all-electric Ford F-150 Lightning, which has the potential to make an even bigger splash. These vehicles mark the beginning of a major turning point from OEMs related to the future of EVs.

C & D points to the Mustang Mach-E as a vehicle with the ability to convert typical car shoppers to electric vehicles. While Tesla has worked to bring EVs into the forefront, many gas car lovers don’t support the company. However, it won’t come as a surprise when hardcore Ford fans start going electric thanks to the Mach-E, as well as the upcoming F-150 Lightning.

The publication admits that Ford certainly borrowed some ideas from Tesla. However, it also says:

“Ford managed to make the cabin design feel fresh without resorting to gimmicks or trying to pass off cost-cutting meas­ures as innovation the way Tesla does. And unlike in, say, a Model Y, there’s no learning curve for driving a Mach-E.”

We’ll be even more excited when EVs don’t have separate awards, and a car like the Mustang Mach-E wins Car of the Year awards over gas-powered models.

At any rate, Car and Driver has plenty to share about its EV of the Year, so follow the source link below for all the details. Then, head back and share your takeaways. Do you agree with C & D?