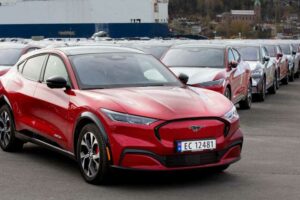 According to a recent report by Autocar, the Mustang Mach-E electric crossover – Ford’s competition with the highly efficient Tesla Model Y and Model 3 – has just set a new Guinness World Record for EV efficiency.

The record claims that the all-electric crossover averaged an impressive 6.54 miles per kilowatt-hour during an 840-mile road trip. The trip took the EV from John o’ Groats to Land’s End, which is basically the entire length of the island of Great Britain, though the Mach-E’s particular route was longer than the most direct route.

The trip started on July 3 and took 27 hours to complete. The team drove an average speed of about 31 mph, so this was more of a hypermiling test than a traditional efficiency test. The team only stopped twice to charge, and the total en-route charging time added up to just 45 minutes, not including the time it took to initially charge the car for the trip.

While the Mach-E doesn’t have as much EPA-estimated range as some rivals, and its EPA-rated efficiency isn’t among the best in the business, it was still able to pull off this epic feat. The team shared via Autocar:

“This record is about demonstrating that electric cars are now viable for everyone. Not just for short urban trips to work or the shops or as a second car, but for real-world use on long cross-country journeys. We’ve proved that, with this car, the tipping point has been reached.

The Ford Mustang Mach-E’s range and efficiency make it an everyday car for tackling unpredictable journey patterns. We did a full day’s testing totalling 250 miles and still had 45% battery charge on our return.”

This is precisely the reason EV drivers can’t just rely on a single standard for estimated range. If you do a ton of highway driving, and you exceed the speed limit often, you’re not likely to come close to achieving most electric cars’ EPA range estimates. However, if you mostly drive around the city, you may be quite surprised at how much range your car has.

Scroll down to the comment section and let us know what you think. Could other EVs easily beat the Mustang Mach-E’s record under similar conditions?