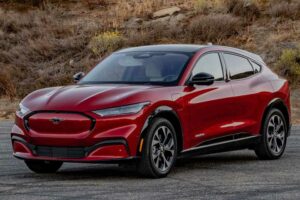 According to the US National Highway Traffic Safety Administration (NHTSA), some 2021 Ford Mustang Mach-E electric crossovers could have a software issue. The issue may lead to unintended acceleration, unintended deceleration, and/or a loss of power. Since these concerns increase the risk of a crash, Ford has issued a recall.

Ford is recalling as many as 464 Mustang Mach-E vehicles as of May 13, 2022. NHTSA says that safety-related software isn’t working properly. More specifically, the software could potentially “ignore” the EV’s unintended acceleration or deceleration. Moreover, it could fail to recognize “vehicle movement on the secondary axle and/or incorrectly detect a lateral hazard on the primary axle.”

The related documents share that a software update that was intended for a later model year was mistakenly pushed to some 2021 Mach-E SUVs. The update is causing the car’s software to incorrectly report torque figures at zero on the secondary axle.

It has been proven time and time again that unintended acceleration is exceedingly rare, and, in many cases, impossible. However, with new cars becoming much like computers on wheels, and with a heavy emphasis on software, bugs and glitches are to be expected. It’s good to know Ford discovered the issue and plans to fix it promptly.

Fortunately, Ford will be able to remedy the concern via a software update to the Mustang Mach-E’s power control module. The recall specifies that the free software update may be handled at a Ford or Lincoln dealer, or buyers may be able to take advantage of an over-the-air software update, which wouldn’t require a trip to the dealer. Ford plans to take care of the issue in May 2022.

Ford says that impacted Mustang Mach-E crossovers were manufactured between October 3, 2020, to May 26, 2021.

If you own a Ford Mustang Mach-E that’s potentially affected by the latest recall, Ford will contact you between now and May 30, 2022. Dealer communications already went out on May 16.

To see the official NHTSA recall document for yourself, follow the link below:

Do you own a Ford Mustang Mach-E or are you planning to buy one? Let us know what you think of the performance-oriented electric crossover. Head down to our comment section and start a conversation.