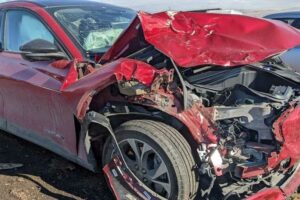 The Ford Mustang Mach-E has already proven that it can perform well in crash tests. This comes as no surprise since EVs are safer than gas cars. While Tesla is constantly touting the safety of its vehicles, several other electric cars and SUVs also fare well in crash tests, as well as real-world accidents.

According to a recent post on Mach-E Forum, a driver of the all-electric Mustang crossover crashed into a parked truck at a high speed. Fortunately, no one in the Mach-E was seriously injured.

The Ford Mustang Mach-E earned a five-star overall safety rating from Euro NCAP, as well as a Top Safety Pick designation from the Insurance Institute for Highway Safety (IIHS). However, it hasn’t yet been crash-test by the National Highway Traffic Safety Administration (NHTSA).

As the story goes, a Mustang Mach-E owner decided to let a friend check out his EV. The Mustang owner says the friend, who owns a mechanic shop, had hoped to drive his Mach-E Premium with all-wheel drive. However, the drive didn’t turn out quite like the owner and his friend expected. He writes:

“Friend wanted to drive my Premium AWD Mach-E. Great guy, owns his own mechanic shop. I jumped in the back seat and my son sat in passenger front. He accelerated around a blind corner from 42 to 72 on an open road and underestimated the power and acceleration. (his first time driving an EV) As he corrected, he slammed into the back of a parked pick-up at 72 mph. Totally horrifying.”

How very sad … but the most important part here is that everyone was okay. The Mustang Mach-E proved incredibly safe. Everyone in the car walked away with just minor bruises and burns from the car’s airbags.

The owner calls the Mach-E’s design technology amazing. He says he’s in his 60s and has never been in such a serious accident. At this point, he’s just waiting to learn whether or not the electric crossover is totaled. Regardless, he says he’ll certainly be driving a Mach-E in the future.