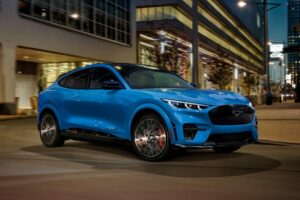 Engineers have unlocked more usable battery capacity, which has resulted in improvements to claimed range across the Ford Mustang Mach-E line-up

Ford has unlocked more usable energy from the battery packs fitted to its Mustang Mach-E electric SUV for the 2022 model year, resulting in small but useful improvements to real-world range for most models in the line-up.

The first cars to benefit from the changes will be delivered at the end of the first quarter of 2022.

Initially uncovered on Ford’s US configurator, depending on specification the Mach-E will offer between one and 7.4 per cent more claimed range, resulting in as much as a 17-mile gain on the Standard Range RWD model, according to American EPA range estimates.

In the UK the Standard Range RWD car offers up to a claimed 273 miles on a full charge, meaning the MY22 car could deliver up to 293 miles.

An exception to this development is the high-performance Mustang Mach-E GT.

Standard Range battery models have seen an increase in usable energy from 68kWh to 70kWh, while Extended Range models’ usable capacity has increased from 88kWh to 91kWh.

It has been accompanied by a change to the car’s charging curve as well, particularly beyond 80 per cent charge, where rapid charging usually tails off on many EVs to preserve battery longevity.

Ford General Manager of Electric Vehicle, Darren Palmer, had previously promised upgrades to fast charging capability at high states of charge, with owners on forums already reporting improvements to charging speed at higher battery capacities – beyond 40kW at more than 80 per cent capacity in some cases.