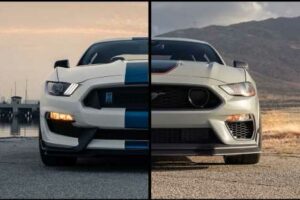 There are few things that somehow get better as they age. Tom Brady, Châteauneuf-du-Pape, and the Ford Mustang are three examples of Father Time seemingly taking a hands-off approach. The new Ford Mustang Mach 1 is excellent, and it represents the tippy-top of the non-Shelby Mustangs—it essentially replaces the GT350. We’ve gone on record as saying it’s “a GT350 with a lower redline”—high praise.

But just how does the new Mach 1 stack up against its Shelby-badged siblings from this generation? The GT350s and GT500s might catch all the headlines, but according to our instrumented testing, the Mach 1 is surprisingly close to the snake-wearing ‘Stangs. That makes the Mach 1 a truly excellent sports car, but there’s another, even cheaper option that puts the Mach 1—and most Shelbys—in its rear-view mirror.

What the Numbers Mean—and How We Get Them

Before we dig into the gritty-nitty, it’s worth explaining what our test numbers are all about. First up, we hit the drag strip—except, we don’t. MotorTrend doesn’t use a prepped surface for any of its 0-60 acceleration testing. We instead test on a regular surface to mimic real-world conditions.

Then comes a gamut of braking and handling tests. The numbers generated by these tests give us an idea of what these cars are capable of once we hit the road. They’re an invaluable tool for determining what a car can really do, and you can read more about MotorTrend’s testing procedures right here. Now, about those Mustangs.

We’re lumping together two different years of GT350 because in 2019 it received a number of major upgrades that made it a much better-handling car. There wasn’t any extra power, but the standard GT350 did get retuned MagneRide shocks, revised spring rates, a new rear anti-roll bar, a retuned braking system, and a massive upgrade in the form of new Michelin Pilot Sport Cup 2 Tires.

Right off the bat, we see that the Mach 1 and both GT350s are within 0.2 seconds of one another for the 0-60 mph sprint. That gap is basically the same all the way through the quarter mile, but the Shelby’s Voodoo V-8 makes more power than the Coyote V-8 in the Mach 1, and the result is a higher trap speed. In the braking test, the Mach 1 stops noticeably better than the 2015 GT350, but within one foot of the 2019 car. This all comes down to tire bite. Both the Mach 1 and 2019 GT350 are on Michelin Pilot Sport Cup 2s, and that alone is the biggest reason why they both out-brake the 2016 GT350 by six and seven feet, respectively.

Again, around our figure-eight handling test, the Mach 1’s tire advantage shows up. It’s half a second faster than the 2015 GT350 and pulls the exact same average G figure (0.82). The updated GT350 is just a tenth quicker than the Mach 1, and the difference between the Mach 1 and the 2019 GT350’s average g figure of 0.83 is so small it’s basically imperceptible. Like we said earlier, the Mach 1 is a GT350 with a lower redline, and the numbers bear that out.

It’s worth noting that, even though the Mach 1 gets within inches of the Shelby’s performance, their prices are also surprisingly close. The Mach 1 we tested came with the handling pack—and you’re going to need it if you want to see the numbers from our test sheet. Even though the Mach 1 starts at $53,915, the handling-pack car we tested rang in at $64,860. The 2019 GT350 started at $61,535, and the last one we tested was optioned up to $64,880. With just a $20 bill between the two and almost nothing in it in terms of performance, which one is truly the better Mustang comes down to personal preference.

The king of the Shelby range (until the GT500 steamed into view) was the GT350R. When we first got our hands one the carbon-fiber shoe’d, R-badged Shelby we said it was “the best all-around sports coupe there is.” It was and remains a fantastic sports car, but the Mach 1 isn’t too far off the back of the R.

The 0.2 second gap between the two Mustangs becomes a 0.4-second gap once they reach the quarter mile. The GT350R not only makes more power, but weighs less. Where that weight comes from is a big deal. The carbon fiber wheels mean that there’s less unsprung weight and less mass at the wheels for the engine to rotate. The result is, basically, that the R is quicker everywhere and that it logs a notably higher trap speed.

It must be said, the Mach 1 is surprisingly close in terms of straight-line performance, and it’s better under braking. The R’s carbon fiber wheels didn’t seem to pay dividends in our 60-0 mph test, because the Mach 1 out-brakes the R by three feet. Around the figure-eight, the GT350R carves out a 0.6-second advantage over the Mach 1. That’s a reasonably large gap around what is a tiny road course but it’s a pricey one, too.

The Mach 1 might cost as much as a normal Shelby GT350, but for the R’s last model year (2020), its base price of $74,630 might have been a stretch for some. The R is one hell of a car, one we’ve said was worth every penny, but with it now out of production, the Mach 1 serves as a cheaper and nearly as quick alternative.

From 2021 onward, the GT500 is the king of the Mustang range. Its outrageous power is complimented by fantastic handling, and the addition of a twin-clutch gearbox sends the Mustang into a whole new dimension of performance. Throw on the Carbon Fiber Track Pack (CFTP), and the GT500 only gets better. That said, there are still some areas where the Mach 1 competes with the big snake.

But when it comes to the acceleration testing, it’s basically no contest. With 760 horses on tap and no time lost to torque interruption for manual gear-shifts, the GT500 and the CFTP-equipped car sprint from 0-60 mph in 3.7 and 3.6 seconds, respectively. At the quarter mile, the GT500s are well out in front of the Mach 1, with gaps stretching to 1.1 seconds for the regular GT500, and 1.3 seconds for the CFTP car. The GT500 wasn’t built specifically for the drag strip, but it’s still quick as you-know-what.

But all that power does have a few drawbacks. Once you reach a certain threshold, the figure-eight test becomes more about managing a car’s power delivery. And tires become even more important, with the standard GT500’s Michelin Pilot Sport 4S underperforming the Cup 2s on the Mach 1 and the CFPT car, which ends up 0.2 seconds quicker and achieves a higher average g figure, too.

On a racetrack the GT500 would find time on every straight and would eventually pull out the quicker lap time, but being so close on our handling course shows just how capable the Mach 1 is despite an almost 200 horsepower deficit to the GT500. That said, the GT500 doesn’t come cheap, starting at $74,095—and the carbon pack tacks another $18,500 onto that price.

The last V-8-powered 1LE we tested doesn’t just roast the Mach 1—it beats every Mustang mentioned here around the figure-eight, and its 93-foot stop from 60 is better than every Mustang on this list, too. A 22.9 second lap at an average of 0.91 g is nothing short of phenomenal, and again, better than any Mustang here. Because it isn’t endowed with supercar horsepower or a twin-clutch automatic transmission, the 1LE does lose out to the most powerful Mustangs in the 0-60 mph sprint, but it’s still quicker than the Mach 1.

Oh and by the way, the 1LE is the cheapest car here, too. With a starting price of $51,090, the 1LE isn’t just the bargain of the group, it’s one of the best performance deals on the market. It has been since 2016.