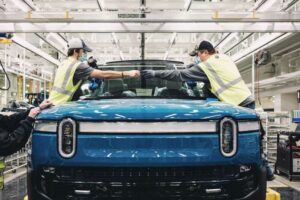 Ford published its Q1 2022 earnings this week, and it showed a net loss of $3.1 billion. The company points to its investment in Rivian stock as the reason for the loss. Rivian’s shares plummeted, which caused a big hit on Ford’s profitability. However, the automaker continues to stick to its full-year guidance, even amid production constraints.

Ford also noted that while the global chip shortage limited vehicle production in January and February of 2022, March saw an uptick in production. The company’s wholesale shipments were down 9 percent on the quarter, to around 970,000 vehicles.

Automotive News reports that Ford was actually a profitable company prior to investing in Rivian. That said, the company’s adjusted earnings dropped 41 percent year over year to $2.3 billion, excluding taxes and interest. In North America, Ford made $1.59 billion in Q1 2022. During the same quarter in 2021, it earned $2.9 billion. Its performance also suffered year over year in all other global markets, aside from South America.

Ford said that the first quarter of 2022 doesn’t accurately depict the potential of its business model. It added that the automaker’s capability is much stronger than what this quarter was able to prove.

Looking forward, Ford will continue with its 2022 guidance of $11.5 to $12.5 billion in “adjusted EBIT.” If the company achieves its goals, it could see a 15 to 25 percent increase over 2021. The automaker also estimates that vehicle production will grow in 2022 to reach levels that are 10 to 15 percent higher than those of 2021.

Ford CFO John Lawler pointed to some 400,000 vehicles already ordered by the end of March 2022. He also shared that strong pricing has already helped to curb the impact of inflation.

Let us know your thoughts related to this story. Was it a bad choice for Ford to invest in Rivian? Will the investment eventually pay off?