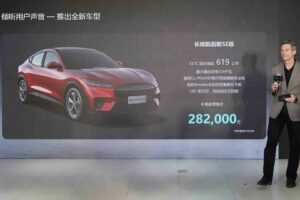 Introduced over the weekend, the new variant is the fifth to become available in China, but only the second priced low enough to be eligible for subsidies. The Standard Range RWD model remains the most affordable at 265,000 yuan ($40,930).

The new SE model offers a maximum range of 619 kilometers (384 miles) compared to 513 km (319 miles) for the base Standard Range RWD variant. Mind you, both estimates are based on China’s new CLTC test cycle. Furthermore, Ford says the SE offers an additional 23 kW (31 hp) of total output as it packs the same powertrain and battery system from the Extended Range RWD model.

That would be 224 kW (300 hp) of power and 430 Nm (317 lb-ft) of torque from a single permanent magnet synchronous motor, allowing for a zero to 100 km/h (62 mph) sprint of under 7 seconds. The battery size is not officially communicated, but the equivalent US model has an 88-kWh capacity.

Ford will start taking pre-orders in China for the Mustang Mach-E Extended Range RWD SE this fall, with deliveries scheduled at the end of 2021. Interestingly, the release of the new Mach-E variant comes just weeks after Tesla announced a lower-priced Model Y in China to qualify for the same subsidies.