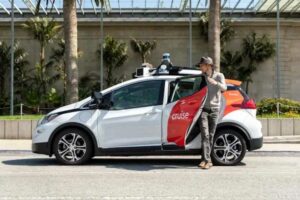 Ford and General Motors have both reached out to US automotive safety agencies in an attempt to get exemptions related to self-driving cars, though it has been kept relatively quiet. The companies have plans to launch a limited fleet of robocars with no typical human controls, such as steering wheels and brake pedals.

According to an article from Reuters, the US National Highway Traffic Safety Administration (NHTSA) can allow a limited number of autonomous cars to drive on US roads with no controls. Ford and GM each hope to put as many as 2,500 (the maximum limit) of these vehicles on the road this year alone, though they’d be for the purposes of ride-sharing and deliveries. The companies aren’t requesting permission to sell the cars to customers.

NHTSA shared GM and Ford’s separate requests this week. The regulatory agency has them open for public comment over the next 30 days.

GM made a request back in 2018. The company wanted to deploy a self-driving car with no steering wheel or brakes built on a Chevrolet Bolt EV platform. However, the automaker withdrew the request in 2020.

GM also shared this past February that it made a similar request to NHTSA to deploy self-driving cars with no steering wheels or mirrors. The autonomous vehicles would also be void of turn signals and windshield wipers.

The company also plans to introduce the GM Cruise Origin, which is a self-driving vehicle that has doors like a subway train. It doesn’t have a steering wheel. GM says passengers must buckle their seat belts before the ride begins. The company noted that it will continue working with NHTSA as the agency reviews its requests.

Ford submitted its most recent petition to NHTSA a year ago, in July 2021. However, it was kept quiet until this week. The brand is making plans to launch a fleet of hybrid-electric vehicles for self-driving, ride-hailing and package delivery services in the near future. Ford informed NHTSA that active driving controls would cause a safety risk with its self-driving cars. A spokesperson from Ford shared via Reuters that the:

“…petition is an important step toward helping create a regulatory path that allows autonomous technologies to mature over time, eliminating controls and displays that are only useful to human drivers.”

Meanwhile, Steven Cliff, an administrator at NHTSA shared that the regulatory agency will carefully examine these petitions to make sure the plans are safe. Moreover, the agency will determine whether or not there are adequate considerations in place for people with disabilities.