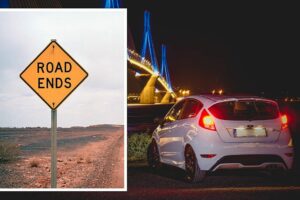 Advert for the next generation Ford Fiesta Active

Ford will reportedly stop the production of the famous Ford Fiesta after the model might have “run out of gas”. The Fiesta has been one of the most popular cars ever in the UK motoring history with over 16 million sales.

There have been three recent developments that could mark the end of the Fiesta.

According to The Times, some people in the motoring media have started speculating that the production of the model might be coming to an end because the car manufacturer is planning on going electric.

On top of that, the production of the three-door version of the Fiesta has already stopped.

The third development that could mark the end for the trusted model is the fact that Fiestas will need a huge refurb in an effort to corner the European electric vehicle market.

The company has also announced its first electric offering for Europe – and the Fiesta isn’t one of them.

However, the long and winding road may not be quite over for the model just yet.

The Times reports that a Ford spokesman said: “Fiesta very much remains on sale.

“Production, supply, and lead times do continue to be affected by the global semiconductor shortage.

“We are working on how to maximise production, building every vehicle for our customers with the quality they expect.”

The Fiesta was first launched in 1976.

The news comes after diesel and petrol owners were hit by the announcement that Ford backed the EU’s plan to ban the vehicles by 2035 to achieve the zero-emissions targets.

Ford was one of 25 large companies to put its name to a petition calling on the European Union to ban the sale of new Internal Combustion Engine (ICE) cars and vans from 2035.

The car manufacturer has already committed to phasing ICE vehicles out of its line-up by 2035 and achieving net-zero carbon neutrality at the same time.

Earlier this month, the lawmakers on the European Parliament’s environment committee backed an EU plan to impose a ban from 2035.

They also voted against proposals for tougher targets to cut car CO2 emissions within this decade, angering climate change campaigners.

The committee supported the proposal for a 100 percent cut in CO2 emissions by 2035, which would make it impossible to sell new fossil fuel-powered vehicles in the 27-countries of the European Union.

The European Commission proposed the targets in a package of climate change policies last year.

They were based around the proposal that new cars stay on the roads for 10 to 15 years – meaning that 2035 is the latest date that sales of polluting cars could stop without affecting the plan to have zero emissions by 2050.

To support this initiative, the European arm of Ford has called on the EU to “establish mandatory targets for charging infrastructure” with a view to facilitating the mass switchover to EVs.

The company did not suggest what these targets should be, but a recent report from accounting giant Ernst and Young showed that Europe would need 65 million chargers in operation by 2035 to accommodate around 130 million electric vehicles.

Some 85 percent of these devices, Ernst and Young said, would need to be installed at homes.

Ford of Europe said that a step change must be made in terms of the quality and capacity of Europe’s EV charging network, if the EU is to achieve its goal of net-zero emissions by 2050.