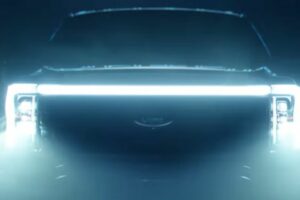 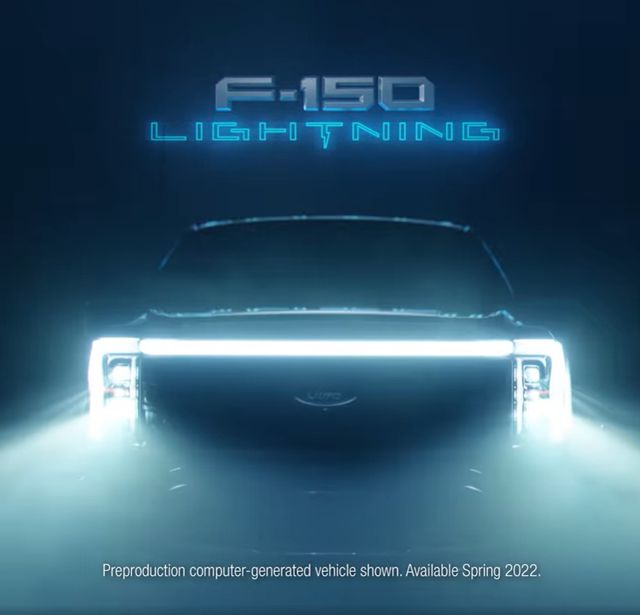 Ahead of the debut of what could be the most important vehicle launch of the decade for the automaker, Ford has released a short teaser video showing off the distinct look of its electric F-150 Lightning.

As we can see in the video, the front fascia of the truck will be different from the internal combustion versions of the F-150, featuring an LED strip along the top edge of the front.

What remains unseen for now is the surface texture of the nose of the truck, which is still expected to feature functional cooling inlets but will appear differently from the traditional grille of the truck. Another element that’s like to be distinct is the shape of the front bumper itself, which we can’t quite glimpse in this teaser video. Still, Ford intends to maintain the family look of the F-150 lineup, so the visual departures from the design of the current truck lineup should be limited but still recognizable from a distance. The truck shown in the short video, however, is noted to be a computer generated model, which was likely created to avoid design details being gleaned from a video showing the light-up sequence of the real truck.

Spy images of the F-150 Lightning has shown that the truck will be offered in four-door form, though the total number of body styles and bed length could offer variety once the initial model is launched. It remains to be seen whether Ford will offer just as much variety in the Lightning lineup as it does in the current versions of the truck, including two-door models, though early on the EV truck market is certainly expected to favor four-door, five-seat layouts.

Ford has kept a tight lid on the specs and design of the truck, which will enter production in mid-2022, but at launch we can expect to see a dual-motor setup offering all-wheel drive and a combined output of over 450 hp, based on Ford’s statement that the truck will offer more horsepower and torque than any other version of the F-150. This suggests it’ll eclipse the Raptor with its 450 hp when it comes to horsepower, and the PowerBoost version of the F-150 that serves up 570 lb-ft of torque.

When it comes to range and battery specs, the F-150 Lightning will certainly have a longer wheelbase that the Mach-E, which features an 88-kWh battery in long-range form, but also greater demands. When it comes to range it should still land north of the 300-mile mark in its top form, though a choice of batteries could offer shorter-range versions, as with other EVs. We don’t expect such a version to offer fewer than 200 miles in the EPA cycle.

The F-150 Lightning will be revealed on Wednesday night, at 9:30PM EDT, from the Ford World Headquarters. You can watch it live here.