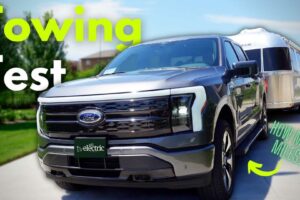 Our friends Katie and Steve and their “All Electric Family” have been quite busy enjoying their brand-new electric trucks. Yes, that’s plural. The family took delivery of their Rivian R1T electric truck and started putting together videos to showcase the truck, at which point their Ford F-150 Lightning also arrived.

Now that All Electric Family owns both the F-150 Lightning and the Rivian R1T, it’s high time to put them to the same tests and see how they compare. They already determined that the Rivian is capable of towing their 7,000-pound Airstream on a 500-mile road trip, and that was after testing it out locally and learning after multiple tests that it can handle about 140 miles on a single charge.

The family headed out on their first test run with the F-150 Lightning, much like they did with the R1T. Once again, they learned rather quickly that while towing their Airstream, the truck would lose about 50 percent of its EPA estimated range, which came out to around 150 miles on a charge, give or take.

At this point, we’ve read, seen, and shared a growing number of towing and range tests with these two electric trucks. That said, the 50 percent range loss and the range estimates of about 140 to 150 miles seem to be right on par. Of course, there is an abundance of variables that could impact these numbers, but at least it gives us a baseline of what to expect.

Is a towing range of about 140 to 150 miles enough to be practical? It certainly depends on the truck’s primary use case. At about 55-60 mph, that’s about two and a half hours of driving between stops on road trips, all while towing a pretty large Airstream. If you’re just planning to pull around a few jet skis or a small boat to the local launch, the range loss may not really be cause for concern.

What do you think? Leave us a comment below.