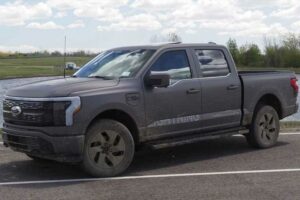 The Blue Oval is apparently spending an extra $850 million to make it happen.

It’s safe to say Ford is on a roll considering the Bronco has more than 100,000 firm orders while the Maverick just surpassed 100,000 reservations. What about the F-150 Lightning? The fully electric pickup has amassed 120,000 reservations, which Ford didn’t expect as it has now allegedly decided to double the production output to keep up with strong demand.

Automotive News cites “several people and suppliers familiar with the plans” claiming the Blue Oval will spend an extra $850 million to make it happen. The original plan was to ramp up production to more than 40,000 units in 2024, but the automaker is now targeting in excess of 80,000 trucks in the same timeframe. Apparently, Ford officials “were pleasantly surprised by the demand for the Lightning,” according to an insider cited by AN.

Meanwhile, production will kick off next year when Ford wants to produce approximately 15,000 units of the F-150 Lightning. A person familiar with the company’s agenda says output will grow to 55,000 vehicles in 2023 before increasing to 80,000 units a year later. Interestingly, AN says the second-generation electric truck is already earmarked for a late 2025 launch and it will have an annual sales target of nearly 160,000 units.

It’s an interesting move on Ford’s part what with the microchip shortage still causing disruptions in the manufacturing chain. The issues are unlikely to go away in the immediate future, but it looks like the Dearborn automaker is confident supply problems will be over sooner rather than later. The F-150 Lightning is going to be assembled at the Rouge Electric Vehicle Center just outside of Detroit where Ford is investing $700M and creating 500 new jobs for the new arrival.

The zero-emissions truck kicks off at $39,974 before any applicable federal and state incentives, which as we discovered earlier this year, can drive down the price to an impressively low $26,974 in Maine. At the other end of the spectrum, a fully loaded Lightning is going to set you back approximately $90,000 before incentives, which is still about $10,000 less than the GMC Hummer EV3X coming fall 2022.

It remains to be seen how many of those 120,000 reservations for the electric F-150 will be converted to actual orders, but we’re certain Ford has done the math and considers the strong initial response warrants a production boost to keep up with customer demand. The EV workhorse will initially compete with the GMC Hummer EV Edition 1 due this fall when the Rivian R1T Launch Edition is also expected to hit the market, while the Tesla Cybertruck has been delayed to 2022.