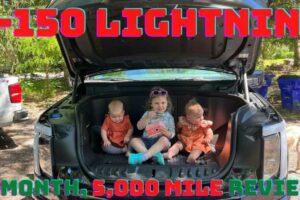 Now that the Ford F-150 Lightning has been on the market for a time, and Ford continues to deliver the electric truck to customers, there’s a growing assortment of information online from owners. That said, this Lightning owner has put a crazy amount of miles on the EV in just one month, and he has plenty to share.

E-Hermes took delivery of the F-150 Lightning electric pickup truck on June 3, 2022. On July 3, 2022, he put together the video above to share the ins and outs of the truck after racking up a whopping 5,000 miles. He explains that the goal of the video is to share not only the features he loves most about the Lightning, but also a few things he’s not so thrilled about.

There’s no question the truck is capable as a truck should be. E-Hermes says it does what’s expected of a truck, all while featuring a quiet and expansive cabin and delivering an incredibly smooth ride over most road surfaces. You won’t have to worry about the truck lacking “truck chops,” though if you’re going to tow a heavy load over a long distance, be sure to plan for lots of charging stops.

E-Hermes is a big fan of the Lightning’s adult-friendly cabin and Mega Power frunk, which has loads of storage space. However, sadly, despite lots of effort, his family was unable to fit three rear-facing child car seats across the F-150’s second row.

This owner goes on to rave about the electric F-150’s instant acceleration, power tailgate, and Pro Power onboard system. As far as charging is concerned, he notes that while the Lightning doesn’t charge quite as quickly as some EVs, it seems to charge very consistently. He also adds that the truck’s range “guess-o-meter” does a fantastic job of keeping owners apprised of the range remaining, which isn’t the case with some rival EVs.

There are many more details in the video related to the truck’s sound system, hands-free driving, exterior lighting, and more. However, E-Hermes concludes by admitting that he doesn’t think Ford’s technology is on par with Tesla’s yet. As Ford makes tweaks and improvements over time, hopefully, that will change for the better.

What do you think of the Ford F-150 Lightning? Did Ford hit the nail on the head? Will this truck prove to sell significantly better once the automaker makes some tweaks for future model years? Leave us your thoughts in the comment section below.