Home » Car Reviews » Ford F-150 Lightning: Is It The Best Truck Ever Produced?

Ford F-150 Lightning: Is It The Best Truck Ever Produced? 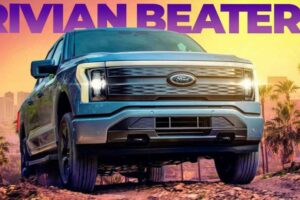 It comes as no surprise the Ford F-150 Lightning is built to impress. Ford is the king of trucks, and the Lightning isn’t much different from the brand’s iconic half-ton gas-powered pickups, aside from its futuristic powertrain. It’s probably safe to assume Ford wouldn’t have even considered bringing the Lightning to market unless it was going to be a huge hit.

With that said, a title suggesting that any truck is the best truck ever made may be cast aside by many as clickbait. However, that’s certainly not the case here. Fully Charged Show reminds us that the F-150 has been the best-selling vehicle in the US for about four decades. For this reason, it makes sense to figure that the new fully electric version would prove to be one of the most important new American cars of the decade.

The real questions here come down to whether or not the F-150 Lightning actually lives up to the hype. Is it a solid EV? Is it actually a good truck, or just a novelty item that will face fading popularity before too long?

Fully Charged Show delivers an excellent overview of the F-150 Lightning complete with details from inside and out, as well as driving impressions. However, the most compelling information in the video is related to real-world public fast-charging, and a good chunk of the video is focused on the current charging situation in the US as a whole. In conclusion, the channel compares the F-150 Lightning to its only current all-electric rival, the Rivian R1T.

Below, we’ve included the chapters and timestamps as provided by Fully Charged Show.

Once you’ve had a chance to watch the video, head down to our comment section and let us know what you think of the F-150 Lightning. Does it live up to the hype? Is it a solid EV, a worthy truck, and possibly one of the most important vehicles to ever come to market?