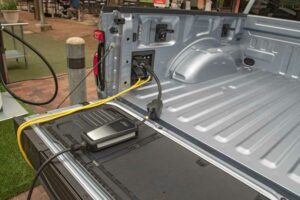 The Venn diagram of internet trolling and automaker leadership converges with an eclipse when it comes to Tesla CEO Elon Musk. In fact, Musk is so troll-like, he’s currently trying to undo his unsolicited, tortured process to acquire Twitter, his favored platform for random musings, epic takedowns, and head-scratching or cringe-worthy statements. Is he trolling Twitter? Everyone? Who knows? But we do know that Ford might just have some cheek of its own, with its own CEO Jim Farley laying down some fine trolling on—yep—Twitter:

“Not trolling. Just helpful.” That’s Farley dishing out a delicious “who, me?” in response to a Lightning Owners forum member (via InsideEVs) detailing how the F-150 Lightning electric pickup’s NEMA 14-50 Mobile Power Cord attachment includes an adapter to fit Teslas, which use their own charge plug standard. The feature in question is the hookup that enables F-150 Lightning owners to charge up their trucks using a 240-volt outlet—and with the included L14-30P NEMA adapter, you can even plug this 30-amp hookup to the 240-volt outlet in the pickup bed to charge up other EVs.

For those who still haven’t pieced together the trolling here, the implication is that Lightning owners with the hookup could “save” stranded Teslas (in addition to other electric vehicles with industry standard charge port designs) by attaching the NEMA power unit to their Pro Power port in the bed and affixing the included J1772 Tesla port adapter. Before you ask, no, you can’t plug the Mobile Power Cord into the F-150 Lightning’s bed and try plugging the charging end into the same F-150 Lightning’s charge port. We mean, you can do that, but as Car and Driver recently showed, it obviously wouldn’t “charge” itself. That would constitute something of a perpetual motion machine, which the Lightning most assuredly is not.

The Lightning is, however, a compelling rolling power station. With the right setup, a Lightning can power your house—it’s a little more complicated than plugging the Mobile Power Cord into your closest 240-volt outlet, requiring a two-way charger and other upgrades to your home—so it’s only natural that in addition to welders, big appliances, and a probably pretty cool tailgating setup this coming football season, the Ford EV also could lend some juice to other EVs. As Jim Farley notes, this is “helpful,” but it’s also a lowkey sick burn against Tesla, whose cars can’t do the same mobile power station tricks as the Lightning. At least, its current vehicles cannot—maybe Tesla’s oft-delayed Lightning competitor, the Cybertruck, will do so whenever it goes on sale.