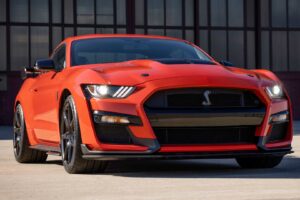 If you’re waiting for an S550 GT500 Convertible it may be time to settle for the coupe. In an interview with Ford Authority, representatives from Ford confirmed that there will not be a GT500 convertible. This break in Mustang tradition is rooted in some very legitimate concerns by the Ford team which lead to the coupe only S550 GT500.

The S550 GT500 Mustang is the most capable factory Mustang ever built, but to achieve this level of performance sacrifices had to be made. For starters, the traditional manual transmission that was available on Mustang GT500s since the beginning is now gone. In its place is a Tremec 8-Speed dual-clutch automatic that can shift faster than you can blink.

To make sure the S550 wasn’t a one-trick pony that could only go fast in a straight line, Ford prioritized things like chassis rigidity, suspension tuning, and brakes strong enough to handle the 5.2-liter Predator V8’s 760 horsepower (567 Kilowatts). This attention to detail and spec sheet makes the S550 Mustang GT500 sound more like an Italian supercar rather than a coupe built in Detroit.

Sadly, unlike most Italian supercars, Ford is not going to build a convertible version of the GT500. In an interview with Ford Authority, Dave Pericack, Director of Enterprise Product Line Management – Ford Icons, explained that the choice to keep the S550 GT500 coupe only came down to body stiffness. To create a convertible with enough body stiffness to support the GT500’s drivetrain, Ford would have had to implement so serious engineering and exotic materials to make the design capable and durable.