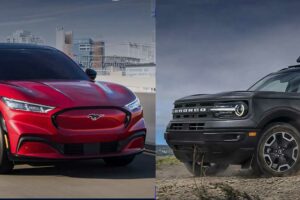 Ford CEO Jim Farley announced major changes to the automaker’s corporate structure today, splitting up its iconic internal-combustion engine (ICE) models like Mustang, F-150, and Bronco and its new EV initiatives like the F-150 Lightning pickup and Mustang Mach-E into two distinct operations, working together under the Ford Motor Company brand. The move comes with a leadership shakeup and a top-to-bottom restructuring of how Ford vehicles get developed.

Just last week, Farley dispelled rumors of spinning off the company’s new EV ventures into a separate new company. While Ford hasn’t gone that far, the rumors were not far off; Ford Motor Company will now operate distinct Ford Model e, Ford Blue, and Ford Drive, Ford Credit, and Ford Pro commercial divisions under the overall Ford umbrella. The announcement further clarified that Lincoln would fit within the existing Model e and Blue framework for its vehicle development.

“Our ambition with Ford+ is to become a truly great, world-changing company again, and that requires focus. We are going all in, creating separate but complementary businesses that give us start-up speed and unbridled innovation in Ford Model e together with Ford Blue’s industrial know-how, volume and iconic brands like Bronco, that start-ups can only dream about,” Ford CEO announced on Wednesday.

Ford says the divergence of its iconic ICE stable from the growing tech and EV side of the business came from “recognition that different approaches, talents and, ultimately, organizations are required to unleash Ford’s development and delivery of electric and digitally connected vehicles and services and fully capitalize on the company’s iconic family of internal combustion vehicles. “

The new Model e division will focus all of the company’s software development, engineering, interface and design workforce on the entire Ford portfolio, but also on clean-sheet approaches to just about everything the company does. Electric vehicles, data connectivity, mobility and retail services will go through Model e, as well as key tech development like battery cells, motors, EV componentry, and vehicle charging.

Looking back at what the company has accomplished so far, you could break down the new Ford Mustang Mach E SUV and F-150 Lightning pickups as something Model e would handle, to find new ways of attracting more customers with a diverse portfolio of products. The new Ford Blue division would be responsible for vehicles like the Ranger, Bronco, and other more traditional model lines and ICE lineups the company still has to manage, while also focusing on improving customer satisfaction.

Ford announcement categorized Ford Blue’s stable of vehicles as the “icons” of the brand, mentioning the F-Series pickup line, Ranger and Maverick pickups, Bronco and Explorer SUVs, and the Ford Mustang, which may stick around as an ICE car for at least another generation, according to the latest rumors.

But this isn’t exactly a sundown program for Ford’s ICE stable. The announcement mentions that Ford Blue will also be developing new vehicles independently from the Model e division, but still compatible to work with the latest technology that division is developing. At least in theory.

Ford Blue will also focus more on customer experience, service, and satisfaction, as well as development of new off-road technologies and capability, street performance improvements for cars like the Mustang, and incorporating more owner lifestyles and passions into Ford products.

Ford CEO Farley will stay on as president and CEO of Ford Motor Company, as well as take on the new role of president of the new Ford Model e division. The driving force behind the innovation of the Model e division will be driven by chief EV and digital systems officer Doug Field, who will also continue to develop new software and embedded systems for the entire Ford Motor Company portfolio, as well.

Field promised “experiences customers can’t even imagine yet,” saying the new company structure will help it “move with speed and unconstrained ambition” for “revolutionary” new cars and products.

Kumar Galhotra has been promoted to president of the new Ford Blue division, saying it had an “extremely ambitious” mission to “invest in our incredible F-Series franchise, unleash the full potential of hits like Bronco and Maverick, and launch new vehicles like global Ranger pickup, Ranger Raptor and Raptor R. We’ll pair these great products with a simple, connected and convenient customer experience that earns higher loyalty. “