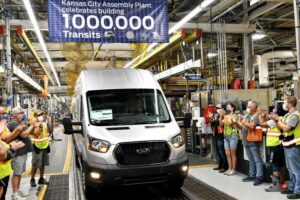 The all-electric version will join the party later this year.

It’s highly likely that it’s not only the first million but also the last million of the conventionally powered Ford Transit, as later this year the company will launch the all-electric Ford E-Transit.

Initially, the E-Transit probably will stand only for a small part of the production, but gradually it should take up the majority and at some point entirely replace the Transit.

Production of the E-Transit in Kansas City Assembly Plant in Claycomo, Missouri, will start in late 2021 (in Europe in 2022) and it will be offered from $43,295 – up to $52,690 for the high-roof extended-wheelbase cargo van (there are eight versatile configurations).