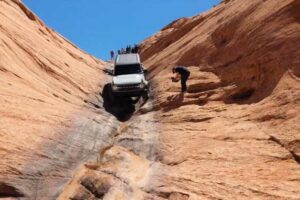 The saying goes: If at first you don’t succeed, try, try again. There’s no saying that goes: If at first you succeed too easily, try again but make it as challenging as possible. After conquering Hell’s Gate in a Ford Bronco Sport almost too easily, the Fun-Haver Off-Road team of Loren Healy and Vaughn Gittin, Jr. threw caution and common sense into the wind by attempting the challenging climb in reverse.

That’s right, Loren Healy threw the stout Ford Bronco Sport into reverse and backed up Hell’s Gate. Why not, right? Well, not so fast. For many off-roaders, Hell’s Gate, an advanced line on the Hell’s Revenge trail in Moab, Utah, is a hell no to even attempt. Even though it offers excellent traction, it’s a steep, off-camber climb up a crevice, with major potential for catastrophe.

We suppose that tackling an off-road obstacle in reverse could be advantageous—although we’re hard-pressed to recall a specific instance. Reverse may be a good gear for crawling, but often, it just complicates things and changes every aspect, especially in a long climb like this. It changes the weight distribution by putting the engine in the rear, and it also changes the steering dynamic by putting the steer wheels in the rear. Obviously, visibility becomes even more distorted.

Check out drone footage of the Ford Bronco Sport with Nitto tires claw its way up the iconic rubber-lined sandstone climb. Remember: Loren Healy and Vaughn Gittin Jr. are both professional off-road racers who compete in the 4400 class of the Utra4 Racing series.