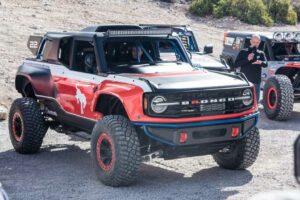 Dig the way the Ford Cobra Jet Mustang represents a factory, not-road-legal, near-turnkey drag racer for quarter-mile fanatics, but wish the off-road world got its own similar sort of deal? It’s about to, in the 2023 Ford Bronco DR, a factory-built, Ford Performance-designed baja racer whose name (“DR”) stands for Desert Ready. Only 50 of these special models will be built, and each will include special Multimatic Positional Selective DSSV dampers, a full safety cage, and a Coyote 5.0 liter V-8.

Not The Same As The Bronco R

While you might be asking, “isn’t there already a racing-only Bronco?”Yes, but the Bronco R is a totally different animal when compared to the 2023 Bronco DR. The biggest change is going from a largely bespoke chassis, drivetrain, and suspension to a more turnkey solution for off-road racing competitors based on a production model. “This is a ground-up build, which is a bit unique in itself,” said Mark Rushbrook, the Ford Performance Motorsports global director. He also said that the Bronco DR “started with the Bronco four-door—the platform and chassis are production true—and then [Ford] modified and optimized every aspect and built the vehicle hardcore off-road enthusiasts want.”

The final package will be announced closer to when the Bronco DRs are ready for sale, but here is what Ford is sharing on what’s coming on the race-ready truck:

The DR’s suspension is handled by longtime Ford Performance suspension collaborator Multimatic. Its work resulted in the original and exclusive High-Performance Off-Road Stability System—”H.O.S.S. “—with a new Positional Selective DSSV Damper with a 3.15-inch-diameter body. These dampers also feature finned cooling channels to prevent the shock oil from boiling and causing cavitation, something that a vehicle such as the DR would likely encounter while its tires bounce up and down, cycling the suspension rapidly at high speed over rough terrain.

The suspension is also enhanced with billet aluminum lower control arms and improves on the production four-door Badlands’ suspension travel by roughly 55 percent in front and over 58 percent in back. We should therefore see a massive 15.8 inches of front suspension travel and 17.4 inches at the rear. The Bronco DR also has 11.8 inches of ground clearance at the underside of the trailing arm protection plate, its lowest-hanging point underneath.

Making Weight With Muscle, Not Fat

The DR will come in at a race weight of 6,200 pounds, mostly thanks to its full fiberglass body paneling, which is made using resin transfer molded (RTM) fiberglass. This also means that full panels will replace the original doors, which is similar to the Bronco R. The normal Bronco’s interior and amenities will also be removed, so there is no air conditioning, radio, and or glass. Hey, it’s an off-road race truck, after all. The only parts retained from the production Bronco body are its round headlights, taillamps, hoodtop trail sights, and single-piece grille. There is also a “Baja race package” available for additional auxiliary lighting and instrumentation.

Going inside the 2022 Bronco DR isn’t a lavish, custom interior with a booming sound system. Instead, we’re going to see it filled with an FEA-optimized safety cage for the driver and passenger and feature the use of the OE Multimatic ACCRA tubes—the strong, yet lightweight canted roof rails of the stock Broncos.

While driver and passenger are both nestled in Sparco race seats and strapped to a set of Sparco safety harnesses, the Bronco DR’s vitals can be monitored by a MoTec C187 display with a CAN data acquisition system mounted to a “familiar instrument panel with signature grab handles and power dome.” This data can also be saved to a cloud-based data access system, if the owner chooses to.

No Turbo V-6 Under The Hood

Instead of the production Bronco’s available twin-turbo EcoBoost V-6 (or, less probably, the entry-level four-cylinder engine), the Bronco DR is fitted with a Coyote 5.0 liter V-8 and a 10R80 10-speed automatic, which is based off Ford’s production 10-speed unit. Electronically lockable front and rear differentials, which can be independently turned on and off as needed, put the power to the dirt, while the front drive power is transferred to the wheels via unique RCV half-shafts.

Above the pilot and co-pilot is a large air intake and it along with a pair of side intakes feed air into the rear-mounted radiator just behind the cabin. In the cargo area now sits a 65-gallon fuel tank to feed that V-8 engine over longer distances. Getting the Bronco DR to a stop is its stock braking system—surprise!—but with a set of upgraded pads.

The power-assist steering system isn’t done with a hydraulic ram or even a typical hydraulic rack-and-pinion you see in desert racing. Instead, it features an electric power-assisted system like the production truck, with upgraded inner and outer tie rods that feature joints better suited to the increased articulation of the long travel front suspension.

A spares package will also be included with every Bronco DR purchase in case customers need to make repairs while racing, which is something of a given in open desert competition. Even the best drivers and teams need to fix things while driving or during a pit stop with the chase trucks. What spare parts will be included, Ford hasn’t said yet.

However, Ford says it expects the 2023 Bronco DR to debut in 2022 with a target of entering the 2022 running of the SCORE Baja 1000. That legendary race has seen the Bronco earn only one 4WD overall win way back in 1969, via pilots Jim Hall and Larry Minor. The Baja and the Bronco have a long history together, with numerous class wins in the 1000 and 500 races. To celebrate its legacy and that only overall win for a 4WD at the 1967 Baja 1000, that first racing Bronco DR will wear the Hall-Minor Bronco colors of red, white, black, and blue in its livery.

Expected to launch in late 2022, the Ford Bronco DR will only have 50 units available initially with an estimated price tag in the mid-$200,000 range. If you know anything about open desert racing, that’s chump change for a race-ready and brand-new 4WD vehicle, and frankly, it’s not much more than some dealers are charging for regular ol’ street Broncos.