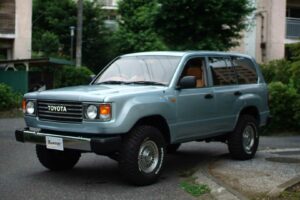 Do you want the style of a classic Toyota SUV with the performance of a modern truck? Well, you’re in luck because the team at Flex Automotive, a Japanese SUV retrofitter, is expanding its operations to America with a new San Diego, CA location. American Toyota enthusiasts can now purchase an SUV that looks like a 60 series Land Cruiser but with modern tech and construction.

Flex Automotive calls their products renoca, which is a combination of the words renovation and car. According to Flex Automotive, “Renoca’s purpose is to promote a new car culture. It “renovates” used models of Toyota’s most durable vehicles, the Landcruiser and Hiace. The fully renovated interior is as if brand new, the exterior is given a classical-looking facelift.”

Flex Automotive will also offer a Tacoma-based pick-up truck that will only be sold in the American market. We expect a similar combination of classic Toyota styling with the interior and performance of a modern Tacoma.

If you’re not sure how to plan your build Flex Automotive’s online configurator has you covered. You can customize your new renoca to your exact specification to see if the final build is truly the Toyota of your dreams.