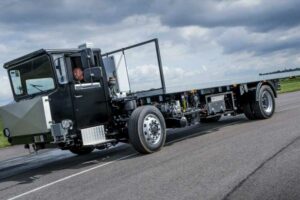 The first Volta Zero prototype may not look pretty, but it doesn’t need to.

The start of testing comes soon after Volta Trucks revealed the first prototype chassis of the Volta Zero, which will be marketed as “the world’s first purpose-built full-electric 16-tonne commercial vehicle designed specifically for inner city logistics.”

The prototype vehicle was developed in just eight months from first designs to running vehicle, and is currently undergoing development testing at HORIBA MIRA in Nuneaton, UK. Dubbed “Volta Minus One” by development engineers, the prototype vehicle features the proposed production specification chassis frame and drivetrain of the finished vehicle.

Testing will allow Volta to assess all the electro-mechanical and thermal properties of the truck, including the high-voltage battery supplied by Proterra and the compact rear axle, electric motor, and transmission eAxle unit from Meritor.

As you can see in the opening photo, the prototype has a provisional bodywork purely designed to protect the driver from the elements at speed. While the production vehicle will feature a cargo box design (check out the gallery above), the prototype uses a flatbed to allow engineers to add different levels and locations of loads to test its weight-carrying capacity.

Over the coming months, the prototype Volta Zero will continue testing at the UK proving ground and will also perform cold weather testing north of the Arctic Circle and hot weather testing in southern Europe alongside other later-specification prototypes.

The development program will ensure that the “production-specification Volta Zero vehicles deliver the durability and reliability expected by fleet operators and vehicle owners,” according to the company.

Volta Trucks will take these learnings into the production of Pilot Fleet vehicles that will be tested and evaluated by key customers. Full-scale production of customer-specification vehicles is set for the end of 2022.