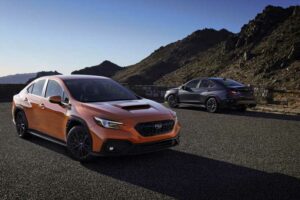 The Subaru WRX holds a unique place in the hearts of driving enthusiasts with its rally-inspired heritage and all-wheel-drive performance credo. For 2022, the sedan gets a complete redesign that introduces the fifth generation of the car.

The updates touch every part of the WRX, which joins the rest of the Subaru lineup (BRZ excepted) on the Subaru Global Platform. This results in a stiffer platform and lowered center of gravity, fixing two of the problems that hampered the last generation car. There is also a new trim level, the WRX GT, that introduces an adaptive suspension for the first time to the WRX and adds on Recaro front sport seats and 19-inch gray-finished alloy wheels.

Though each of the body panels are new, the WRX’s styling still closely matches the previous generation car. The signature hexagonal front grille is flanked by standard LED headlights, with a more intricately detailed set of Kono-ji headlights optional. It’s a burlier look for the WRX; the rear diffuser has been beefed up significantly and it now creeps higher up the sides of the bumper. The black cladding that runs down the sides and rear are now dimpled plastic that Subaru says is more aerodynamic.

Under the hood, the engine is all-new to the WRX, though the 2.4-liter turbo-4 boxer is found in the Ascent, Legacy, and Outback as well. In this application, it adds an electronic wastegate and a different sized turbocharger. Output is 271 hp and 258 lb-ft of torque, a gain of only 3 hp compared to last year’s car, but Subaru says that the added wastegate and bypass valves in the turbocharger make it more responsive.

AWD is of course standard and there are two available transmission options: a 6-speed manual and (sigh) a CVT. The CVT is going through a publicist driven rehabilitation project, with Subaru now calling it the “Subaru Performance Transmission (SPT).” It has gotten a few key improvements, though it’s going to take more than a new name and some promises to convince enthusiasts that it’s a fitting choice for a performance car. The transmission now offers 30% faster upshifts and 50% faster downshifts with rev matching, and the lower “fixed” gear ratios have been adjusted to improve responsiveness. Both transmissions are available on each trim level, minus the GT which is CVT only. A new dual-pinion electric power steering system has also been introduced that Subaru says will deliver a quicker response to driver inputs and a more natural feel.

I had the privilege of experiencing both transmissions and the new adaptive dampers firsthand on a ridealong with former F1 and current Subaru Rally driver Scott Speed at the Thermal Club raceway in Palm Springs, Calif. Though Mr. Speed indicated that the CVT would be his choice for day-to-day livability, the manual was his weapon of choice on track and that matched my impressions from the passenger seat. The WRX felt more lively with the manual transmission and seemed to get out of corners with more impetus; with the CVT, even though the shifts were faster, it was harder to keep the WRX in its powerband and get the desired responsiveness out of the powertrain.

The performance of the adaptive dampers was impressive. Both versions of the WRX felt more stable and exhibited less body roll than the previous car, but the WRX GT took it to another level. It didn’t hop up as much coming down off the track’s large kerbs, and on a high-speed chicane, it handled a quick left-right jig with less rebound. The WRX GT’s Recaro seats were much appreciated on the track; the standard seats didn’t have enough bolstering to keep me from sliding into the door on more than one occasion.

Inside, the biggest change is the introduction of an 11.6-inch tablet style touchscreen. Subaru has not yet released trim level information so we don’t know if the screen will be standard, but it does represent a big improvement over both the 6.5-inch and 7.0-inch screens from the last generation WRX. Standard features will include Android Auto/Apple CarPlay connectivity, bluetooth, a 60/40-split rear seat, and a sporty flat bottom steering wheel.

Final dimensions for the car are not yet available, though Subaru did concede that the new car is lower, slightly longer, and slightly wider than the previous generation WRX. We’d also surmise that the wheelbase has been stretched since the backseat seemed to have more legroom and offer more comfortable accommodations for adult passengers.

WRXs equipped with the CVT get a big advantage in safety features, with automatic emergency braking, active lane control, and adaptive cruise control standard. With the manual transmission the only advanced safety feature available is blind-spot monitors. An automatic emergency steering system is available that helps with steering to avoid collisions at speeds of under 50 mph.

Though there are many details still missing for the 2022 WRX, the early returns are promising. From the passenger seat, it feels more taut and lean than its predecessor (albeit in professional hands), accomplishing many of Subaru’s goals in the redesign.

The 2022 WRX will arrive at dealerships early next year and will be exclusively produced at Subaru’s plant in Yajima, Japan.