First Production Rimac Nevera Exists Because Of These 14 Cars 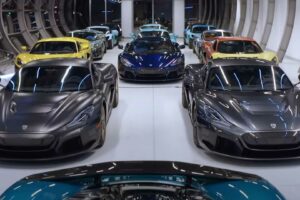 The life of the Rimac Nevera started out as any bespoke hypercar would – homologation processes, several prototypes, testing, and development. For the Croatian hypercar, which was previously known as the C_Two during its prototype stage, 17 cars were used during the course of its five-year development.

Mate Rimac, the CEO of the now Bugatti-Rimac, takes us on a quick tour of the various prototypes that the company used, paving the way to the birth of the first production Rimac Nevera. A total of 14 cars were in attendance for the video – each has its own purpose during development.

The first was the prototype used for aerodynamic testing. Specifically made for wind tunnel testing with aero parts easily adjustable, it’s used so Rimac could evaluate the Nevera’s design early in its life. Then there were the driving prototypes that we’ve previously seen on the road. There were three, used in three different facilities. Only two are still around at this time – with the cars having nothing in common with the next prototypes.

The six validation prototypes “took the bulk of the torture,” as Rimac has put it. They were crash-tested several times, to the point that two of them only came as a monocoque in the video. The last crash test was done in February for certification in the US and Europe.

One of the five preseries cars was also present in the video, which was the famous Nevera cars tested by the media.

When the Nevera project started, around 300 people were working on it. Now, around 1,500 people are involved as the production of the electric hypercar has started. The first production Nevera is already out and about, with customer deliveries happening soon as the first Nevera has already gotten its registration in Croatia.