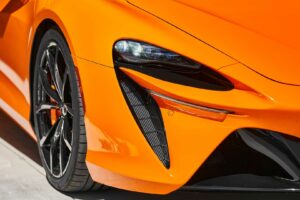 Even though McLaren was one of the first dedicated sports car and supercar makers to embrace electrification, when it created the P1 to rival the Ferrari LaFerrari and Porsche 918 plug-in hybrids, it looks like its first electric car won’t follow the mid-engined two-seater formula. According to a new report, the Woking-based manufacturer will instead try to produce a Porsche Taycan rival as its first EV, as well as a related SUV.

AutoExpress quotes McLaren’s new CEO Michael Leiters, appointed in April of this year after having previously served as Ferrari Chief Technology Officer for over eight years. Leiters doesn’t directly say what kinds of EVs McLaren intends to make, but it can be inferred from his statement that he is talking about a vehicle that could seat more than two people.

He also uses the words ‘utility’ and ‘lifestyle’ to refer to the types of vehicles being considered, suggesting that practicality and day to day usability would be important, noting that

The technology is much more mature [and allows us to] customise it to have a more lifestyle, a more utility purpose.

Words like ‘utility’ or ‘lifestyle’, you’ll obviously leap to certain conclusions. I think the key measure for McLaren is potentially something with the ability to share with more occupants in the car. Not necessarily higher-riding, but it could be.

The vehicle won’t cost less than £200,000 (equivalent to about $236,000) this being deemed the minimum entry point for McLaren ownership regardless of body style. And even with a sedan and SUV in its lineup, McLaren wants to remain focused on profit over sales volume.

McLaren will also need a technology partner in order to build EVs, since it has not developed its own electric powertrain. For its latest electrified model, the Artura plug-in hybrid, it enlisted the help of BMW, and the two companies could expand their collaboration to include completely electric powertrains too – apparently BMW is open to the idea.

We also covered another report in October that also came from a UK-based automotive outlet and also quoted the new McLaren CEO. It stated that a high-riding McLaren EV was already in the works, but nothing was officially confirmed by the top exec.