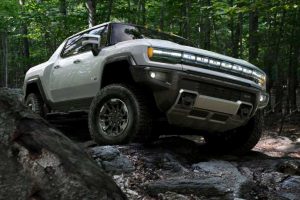 The GMC Hummer EV already offers up benchmark numbers in the electric supertruck market. Along with its 1,000 horsepower (746 kilowatt) electric powertrain, it can also crank out an estimated 11,500 foot-pounds (15,592 Newton-meters) of torque – which is getting dangerously close to semi-truck territory. It recently added another achievement to its resume, with the first example selling at the Barret Jackson Auction House for $2.5 million (€2.1 million at current exchange rates).

As the electric truck genre is shaping up to be quite the battleground, we’d be remiss not to mention that the latest Hummer was developed without looking at its rivals. Hummer’s EV Performance Engineer Todd Hubbard aims to set the standard with the battery-powered truck; an intention that is already quite clear with many of the clever features that the vehicle has to offer.

Ditching the internal combustion engine allowed the engineering team to have some fun with facilities such as crabwalk and aggressive four-wheel steering. All of these ideas are very impressive but don’t panic, because the truck still comes with bread and butter off-roading features including 18 underbody cameras, 35-inch tires, underbody armor, and adaptive air suspension – supported by 350+ miles of range.

While the very first vehicle has already sold at auction sporting a super price tag, the remaining Edition 1 models sold out within an hour for a slightly more modest starting price of $112,595. The next model – the 3X – is set to hit production in the fall of 2022 with a starting MSRP of $99,995.

As these early models will set you back a pretty penny, prospective buyers will be glad to hear that GMC is staying on its EV offensive. The American automaker is scheduled to reveal an SUV variant of its supertruck on April 3, 2021 at 5:00 PM EST.