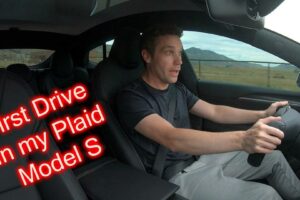 Ever since it was announced in January 2021, the Tesla Model S Plaid has captivated the attention of the entire auto industry. Here is a car that can comfortably seat five adults and has 894 liters of luggage space yet still beats every production hypercar in a quarter mile drag race (bar the epic Rimac Nevera). It can also run console-level video games on its two infotainment screens, and features all the latest self-driving tech. The hype surrounding the Plaid has understandably been palpable, and now a lucky few are getting their hands on one.

YouTuber DÆrik already owns multiple Teslas so comes from a place of experience. You would expect he is used to the crazy acceleration and impressive technology associated with Tesla’s vehicles. However, the Plaid clearly turns things up a notch.

When pulling off the lot for the first time in his new Model S Plaid, DÆrik immediately noted how quiet the vehicle was. He remarked that it is quieter than any of his previous / current Teslas (which includes everything bar the first-gen Roadster). He also felt the ‘yoke’ steering wheel would take some time to get used to, accidentally turning on the car’s wipers when he only intended to rest his thumb.

Two weeks and 490 miles later, DÆrik gave a further update on his Plaid. He noted the car’s ride and suspension is incredibly smooth. The finish of the car is also high quality and super solid according to DÆrik, which is good news as build quality has often been an area of controversy for Tesla in the past.

DÆrik has also gotten more used to the yoke. There are multiple ways to hold it, and the buttons work well. That said, he still accidentally hits the turn signals from time-to-time when instead trying to press the scroll button. The vehicle’s voice control and infotainment is responsive and works well too. And of course, the acceleration is immense. Overtaking only requires a single press on the accelerator and you’re gone – DÆrik simply describes it as “alien”.

Overall, DÆrik is super happy with his Model S Plaid. Rapid, well-built and tech-laden, what more could you want from a car? Perhaps a normal steering wheel and stalks… but maybe the future will just take some getting used to.