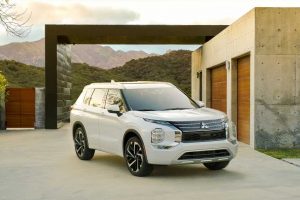 The 2022 Mitsubishi Outlander arrives with a unique redesign that finds the compact crossover SUV sporting new styling on the surface, but a familiar platform underneath shared with the Nissan Rogue. This is the first Mitsubishi produced in conjunction with Nissan, and that closeness conveys a level of familiarity in the new Outlander.

Much like relationship conventions in the current age, Mitsubishi’s relationship with Nissan is hard to label. To hear Mitsubishi describe it, it is an alliance, one in which Mitsubishi models will bear an increasing familiarity to their Nissan counterparts.

The best analogy to this setup is the one between Hyundai and Kia, where the two companies share platforms, engines, and technology, though the styling, tuning, and packaging is left up to each entity.I spent a morning piloting the Outlander around Orange County in Southern California, parsing out the differences between the Outlander and the Rogue and getting a taste of the suburban life that’s ideal for this compact crossover.

The Outlander distinguishes itself from the Rogue with some daring styling choices, especially up front where large six-element LED headlights that sit below LED running lights that bleed off the top of the front grille. Gone is the curvy look of the previous generation, replaced by a boxy ruggedness and a flat roof. It’s an improvement in my eyes from the last Outlander.

The Outlander rides on the same platform as the Nissan Rogue and the two vehicles share a powertrain as well: a 181 hp, 2.5-liter inline-4 joined to a continuously variable automatic transmission (CVT) and standard front-wheel drive, with all-wheel drive optional. It drives like the Rogue, though this is also an improvement. The old Outlander bogged down at low speeds with its old inline-4 setup. Low-speed responsiveness has improved in all drive modes except Eco mode. Avoid Eco mode unless accelerating at a sluggish pace is your cup of tea.

The body rolls during quick changes of direction but that is par for the course in this segment. The Outlander’s steering is less numb than expected, with some decent feedback in the wheel but not enough weight for my tastes. Mitsubishi’s all-wheel drive system adds $1,800 and includes a few additional drive modes to adjust the all-wheel drive system to different conditions, such as snow, gravel, or mud.

My top-of-the-line SEL with Touring Package also featured a much improved interior. The outgoing model had lots of black plastic trim that gave it a dour appearance. That’s changed with a two-tone interior and a pair of comfortable front seats with semi-aniline leather upholstery and diamond stitching. The screens on the dash match up with the Rogue to the inch; an 8-inch touchscreen is standard, with a 9-inch touchscreen optional. There’s even the same optional 10.8-inch head-up display and 12.3-inch digital dashboard behind the wheel that’s been slightly reskinned to look different. And just like the Rogue, wireless Apple CarPlay is standard, though Android Auto still requires the use of a cable.

The new Outlander is larger all-around than the old model, with a 1.4-inch longer wheelbase and 2 inches of added width. This boosts second-row leg room to 39.9 inches, but third-row legroom has plummeted all the way down to 18.7 inches from 28.2 inches. Mitsubishi says that the second-row can now slide more to open up some leg room for the third row, but it really doesn’t do much. I can’t tell you how the third-row is because I took one look and refused to climb back there; had I gone in at 5-foot 11, I may never have made it out. The floor is so high that there isn’t any room to even put your feet under the second-row. There’s no way an adult fits back there under any circumstances—even a small child would complain about the accommodations. So while the Outlander is still the only vehicle in the segment to offer a standard third row, I’m not sure what it’s good for.

The Outlander still offers pretty good value to start. ES models cost $26,990 and come with a good set of features and a nice 5-year/60,000-mile basic warranty. My test vehicle stickered at $37,995 (including destination charges), putting it near the higher end of the class (the Rogue Platinum tops out at $85 more). The added refinement to the drivetrain, interior improvements, and technology upgrades make this price much more palatable than before for the Outlander.

Going into this drive, I liked the Rogue so I was pretty sure that the Outlander would follow suit. And it does for the most part: the two vehicles drive similarly and have closely matched feature sets. Mitsubishi’s multimedia system feels a step or two behind Nissan’s, but neither feels great, with dated graphics and fonts (especially for navigation). Both Android Auto and Apple CarPlay offer superior user experiences. In all, however, the alliance seems to have changed the Outlander for the better and bodes well for Mitsubishi’s future offerings.

The Outlander’s warranty gives it a leg up on the Rogue’s 3-year/36,000-mile basic warranty, but that’s about it. The third-row should give it an advantage in theory, but in practice it’s too small to count. Much of the choice between the two will come down to styling, with the Outlander’s bold front end standing in stark contrast to the Rogue’s restraint.

The 2022 Outlander arrives at dealerships starting this month.

Mitsubishi provided an Outlander and some tacos for The Car Connection to bring you this firsthand report.