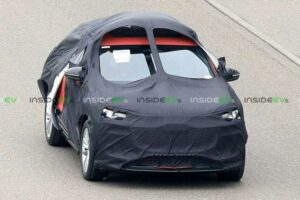 Ever since BMW launched the first X6, which was a more dramatic looking version of the X5 SUV, the automotive industry has scrambled to try to copy the idea in as many sizes as possible. The other premium German brands were the first to try to make vehicles that looked like that and today the trend continues as we move towards EVs, with upcoming models like the Audi Q6 E-Tron Sportback.

Our spies just sent us the very first photos of the Q6 E-Tron Sportback and even though we can’t actually see much because it’s covered in thick camouflage, we have a pretty good idea what to expect. It will undergo a similar makeover applied by Audi to the Q4 E-Tron Sportback when compared to the non-Sportback model.

This means the roof will dip much more aggressively towards the rear, giving the vehicle a fastback-like appearance. The rear lights will be different to those of the regular Q6 E-Tron, as will the rear bumper. We don’t expect major mechanical changes, but suspension calibration may be different for the Sportback, which may end up having a sportier setup than the non-Sportback Q6.

The front end will, however, be identical, as will most of the interior. However, Audi will choose to differentiate the Sportback using unique color options, one of which may be the matte red finish that can be seen through the gaps in the camouflage on the prototype in the gallery.

Powertrain options will be identical between the two model variants, which will be built on the Premium Platform Electric (PPE) architecture co-developed by Audi and Porsche. It’s set to also underpin the first ever Porsche Macan EV, and we can expect both single-motor rear-wheel drive and dual-motor all-wheel drive variants that could have up to 600 horsepower in their sportiest guise.

Audi usually doesn’t show both the standard SUV and the Sportback model at the same time, but the former is expected to be fully revealed sometime this year, before it goes on sale in 2023. The Q6 E-Tron Sportback will probably be revealed in 2023 and go on sale later in the year fetching a small premium over the non-Sportback model.