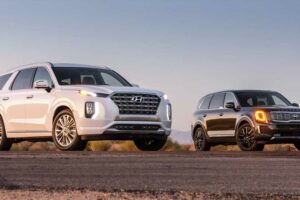 While a lot of the news on vehicle fires has been related to electric vehicles—and the Ford Expedition—that’s not to say other makes don’t suffer “park it outside” orders from the National Highway Traffic Safety Administration (NHTSA). Now it’s the Hyundai Palisade and the Kia Telluride’s turn, with a fire risk related to a factory, dealer, or owner installed trailer wiring harness for the trailer hitch. Until a fix is found, owners are being told to park their vehicles outside to minimize the risk to their homes. A similar part has also included the 2016-2023 Kia Sorento and 2017-2022 Kia Sportage as of September 26, 2022, with the same warning to park them outside, too.

The recall and park outside advisory is for 2016-2023 models that had a Hyundai or Kia approved four-pin trailer connector harness, which allows the lights on the trailer to work in conjunction with the SUV lights. According to the report from NHTSA, there was potentially an issue during production that caused moisture to affect the printed circuit board (PCB) and cause an electrical short. These harnesses were installed at the factory, but could also be purchased and installed at the dealer or installed by the owner. However, we must reiterate that the issue is unrelated to the actual installation, as it’s an issue with the harness’ circuit board itself.

According to the report, just over 281,000 Palisades and Tellurides as well as 70,887 Kia Sorentos (including the 2021-2022 Hybrid and 2020-2023 PHEV) and Sportages have been affected by the park outside order. Four Tellurides and Palisades as well as four Sorentos have actually caught fire, while the remaining 50 vehicles so far involved have been instances of something melting without a fire occurring. The main reason that so many vehicles are caught up in this recall is because of the potential that many of these wiring harnesses might have been installed after the vehicle left the factory. As mentioned above, a dealer or owner could purchase that four-pin harness and install it.

One way to know if your vehicle is equipped with the problematic part is to call your Hyundai or Kia dealer and see if there is a record of that harness being installed. Even then, that’s not a guarantee that you’ll know and an inspection might be warranted, even if the dealer has no record of its installation. Also, this is only for the Hyundai or Kia “genuine” harness and not any aftermarket harness you (or a previous owner that owned your Telluride or Palisade before you) may have installed. Again, if you’re unsure and have no receipts for its installation or purchase, get to your local dealer to see if it’s a Hyundai or Kia harness. The report from NHTSA doesn’t give any insight on how to tell the difference, but your dealer should be able to tell. Until then, park it outside for the sake of preserving your house or parking garage.