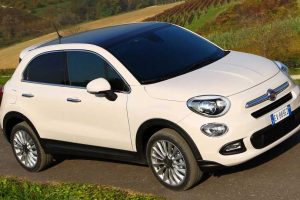 Answering a question no one asked.

The Italian part of FCA is introducing no fewer than three SUVs in 2021 across three different brands originating from the country shaped like a shoe. Alfa Romeo will finally have a sub-Stelvio model with the launch of the Tonale compact while Maserati will have a Grecale companion for the Levante. As for Fiat, it will chop off the fixed metal roof of the 500X to go after the Volkswagen T-Roc Convertible.

The 500X Cabrio was announced internally by Fiat last month during a meeting with suppliers and now Automotive News Europe has learned from a company official the niche model is coming later this year. Supplier sources cited by ANE say the automaker is looking to minimize costs by retaining the crossover’s door frames and entire bodyside, similar to the changes the 500 had to go through to become the 500C.

While VW has removed the T-Roc’s rear doors for the convertible version, the 500X Cabrio will be a four-door crossover with an electrically folding roof and a glass rear window. ANE goes on to mention the quirky little car will be made at the same FCA plant in southern Italy where the standard 500X is assembled alongside the Jeep Compass and Renegade with their 4xe plug-in hybrid derivatives.

Speaking of electrification, the 500X itself will be produced starting later this year at the Melfi plant with a mild-hybrid powertrain to help Fiat abide by Europe’s increasingly stricter emissions regulations. While the cutesy crossover is being updated in more ways than one, there’s still no word about an amped-up Abarth version.

A prototype of the performance-oriented Fiat 500X was built a couple of years ago and tested with three engines. Two came from the Abarth 595 and 695 pocket rockets while the third was the Alfa Romeo 4C’s 1.75-liter unit rated at 237 horsepower and 258 pound-feet (350 Newton-meters) of torque. A production version is nowhere to be found, and while Fiat does sell a 500X Sport, it’s all show without any extra go.