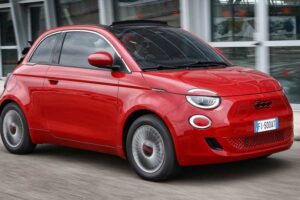 Stellantis is still figuring out how to make the Fiat brand rebound in the U.S., where CEO Carlos Tavares is convinced the Italian small car brand has a future. He thinks there are customers in North America who want a small car as a second or third vehicle, especially in areas like California.

The 500X is the only model Fiat sells here anymore, having discontinued other models after the 2019 model year after they failed to resonate in the market. But a wider portfolio continues to sell in Europe, including the all-new, third-generation 500, designed from the ground up as an EV introduced alongside the old second-generation 500 two years ago. Fiat and Abarth will be electric only by 2027 in Europe and some of those new EVs will eventually make their way to our side of the ocean.

So, we took advantage of an opportunity to jump in the electric Fiat 500 we don’t get here in America while in Amsterdam for the release of Stellantis’ nine-year strategic plan called Dare Forward 2030 for a peek at the car and its place in Fiat’s future.

The 500 we hopped into was a spicy red number with a removable cloth top. It clearly is a descendent of the original Cinquecento and cute as a button.

Inside was a lacquered red dash with seriously cool cloth seats, and not just because of the “Fiat” pattern or the red piping and badging. It was a special edition (Red) model where only the driver’s seat was red, the rest of the seats were black. So Italian chic. We didn’t even mind the heavy use of black plastic in the relatively spartan interior. It made the “500” in red in the center of the steering wheel pop.

The Fiat 500 may be small, but it offers tons of head room making the front seats a great place to be—the small back seats not so much.

It’s been a while since we drove the old Fiat 500e, which debuted in the U.S. for the 2013 model year with a range too limited for the American market. It had a 24-kWh battery onboard, and an EPA-rated range of about 84 miles. (The old 500e was a so-called “compliance car,” built solely to suit regional regulations; such low-range, cheap EVs have largely been superseded in the past decade by similarly affordable options with more power, range, and size.) Contrast that with this new third-generation 500 that has a 62-kWh battery pack and gets about 198 miles of range on the more generous WLTP testing cycle.

Even with a gasoline engine, early second-gen 500s were not powerful. They had a tiny 1.4-liter engine that pushed out a meager 101 horsepower and 98 lb-ft of torque. In our testing, it took 9.7 seconds to go 0-60 mph and the quarter mile required a somewhat leisurely 17.2 seconds at 78.5 mph. Being lightweight and nimble, the old 500 was most fun in tight corners or on, say, a go-kart track (or MotorTrend’s figure eight testing course). For the 2019 model year the car was upgraded with a 135-hp, 150 lb-ft turbocharged version of the 1.4-liter engine, and there were saucier Abarth performance models, too.

The new, all-electric Fiat 500 that Europeans are snapping up has good punch off the line and ample power for a short drive around the streets of Amsterdam courtesy of an 87-kW motor that makes about 118 horsepower, which improves the zero-to-60-mph scoot to about 9 seconds.

The one-pedal driving worked flawlessly—remove your foot from the accelerator pedal and the car quickly comes to a stop with no need to touch the brake pedal.

The latest 500 is even more fun to drive with its light weight and instant torque. Being small, it feels connected to the road, and has the reflexes of a go-kart. Our test car’s navigation system was a bit wonky, and we got lost—which gave us double the trip time. The little car can turn around easily, handy for narrow European streets.

Our little spin erased any old memories of cute but ragged and underpowered rides in a 500. If the new 500 is any indication of the kind of Fiats headed stateside in the future, we have more hope for the brand. Tavares has given each of the 14 brands under the Stellantis umbrella 10 years of funding for core models to prove themselves.

If we had any doubts about the competitiveness of the Fiat 500, they were quickly put aside after our subsequent ride in a 2021 Citroen Ami, which is essentially an electric quadricycle. Don’t get us wrong, the Ami is adorable to look at with its big front window and single wiper, glass roof that extends in front of the driver and connects to a flimsy hardtop, and long side window that does not roll down. From the outside, push a button at the front to open the rear-hinged driver’s door—the passenger door is hinged from the front which enabled Citroen to use identical doors. To open the doors from inside, pull an orange nylon strap.

In front of the driver is a small screen that shows which gear you are in (easy to make a mistake with the gearshift buttons in a pod on the side of the driver’s seat near the floor), speed, and charge level. The navigation system: a holder for your phone. The plastic dash has cupholders, but they are so far in front of the driver and passenger, they are hard to reach.

But it is not a real car and does not pretend to be. The Ami has an 8-hp motor and a top speed of 28 mph, making it a 1,000-pound scooter for two with protection from the elements and more stability. It takes off like a golf cart, has about 43 miles of range, and stops on a dime. The car is loud and jerky, the ride bumpy and almost uncomfortable, with little help from the thin leatherette cushions on the two molded-in plastic seats. Want quirky? The Ami scores top marks. Want something small, stylish, electric, and (hopefully) affordable? The new 500 would make a compelling option even here in America…