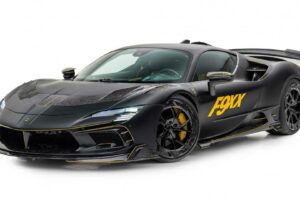 Over the last year, Mansory has modified several Ferrari models, and it is far from done. The tuner’s latest takes the SF90 and cranks up the styling and the power to create the Mansory F9XX, a follow-up to the tuned F8 Tributo that became the F8XX.

The new F9XX gives the Ferrari a thorough design makeover. The new body components are made from forged carbon, and they aid in increasing the car’s overall performance. The special front clip increases downforce on the front axle, while the double diffuser at the rear helps guide airflow underneath the SF90 and increases downforce on the rear axle. Airflow to the front radiators is also key to Mansory’s makeover.

Mansory also gives the Ferrari a large rear spoiler and a new rear apron, both also assisting in creating downforce. The rear sees a significant overhaul, with a four-pipe exhaust system now sticking out. Mansory covers the engine with a full carbon hood, which comes with a scoop on the coupe. The carbon hood lacks the scoop on the Spider variant.

The increased performance translates to a blistering 220-mile-per-hour (355-kilometer-per-hour) top speed. The Mansory F9XX can hit 62 mph (100 kph) in 2.4 seconds.

Mansory dresses up the interior with black and yellow accents, which carries over to the seats. The Ferrari gets Mansory’s sport leather steering wheel, Mansory’s floor mats, and Mansory logos throughout. There’s a copious amount of leather and carbon in the cabin. The F9XX wears staggered 21- and 22-inch one-piece black wheels that feature a new design. The tuner also modified the car’s suspension.

The new Mansory Ferrari SF90 joins the likes of the Roma, F8, and Portofino, which have already received makeovers from the tuner. The company combines striking aesthetics with sizable power increases that take some of the world’s most potent supercars and luxury vehicles to new performance levels.