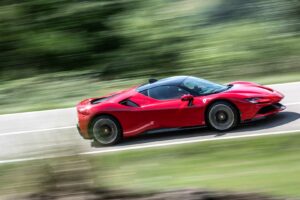 Ferrari, like all other car manufacturers, is being forced to change the power source of its future vehicles, in order to comply with increasingly stringent emissions regulations. The company says it is committed to eventually building only electric vehicles, and some hybrids until then, but it apparently needs a new place to manufacture EVs.

Now according to Bloomberg, Ferrari recently purchased land near its traditional Maranello factory in northern Italy. The source says the land was acquired so that Ferrari can build a new (third) assembly line that will only make electric and hybrid vehicles.

The company already has experience building electrified vehicles, the first of which was the Ferrari LaFerrari, whose poorly chosen name has aged badly. It has an electric motor that boosted its V12 engine to a total power output of 950 horsepower. However, the LaFerrari was a hybrid, and the company’s first plug-in hybrid, the 986 horsepower SF90, only debuted in 2019.

Ferrari is also working on its first ever SUV, the Purosangue, and it is strongly believed that its powertrain will feature electrification, although not immediately after launch. At first it will probably be offered only with a naturally-aspirated V12, but a PHEV version based around 4-liter twin-turbo V8 will be added sometime after launch.

The Ferrari Purosangue SUV will debut by the end of 2022, the plug-in hybrid variant within the next one or two years. The first fully-electric Ferrari is believed to debut in 2025 (although initially tipped to arrive later), but details about that model are extremely limited right now – all we know is the debut year, as well as the fact that Ferrari insists it will still be brimming with excitement and character and it won’t be a huge departure from its current ICE models.

The 2025 launch window for the EV gives Ferrari a few years to build the factory where it will be assembled. Bloomberg says they have already begun clearing the plot of land where the factory is to be built, and it also mentions the possibility that this new facility could include some kind of battery tech research center.

The news is expected to be made official on June 16 when Ferrari’s new CEO, Benedetto Vigna, is expected to make several important announcements including this one and we also expect him to shed more details and elaborate on the time frame for Ferrari’s electrification.