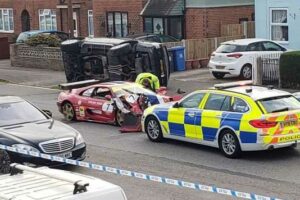 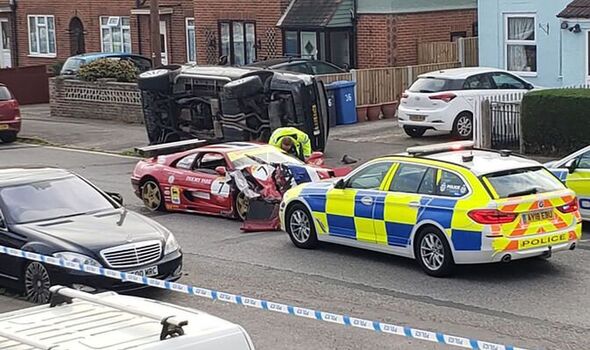 Emergency services dashed to the road at around 7am on Saturday and found no one was hurt in the smash. Police officers, though, arrested a man at the scene.

The road, in Ipswich, Suffolk, was sealed off as police investigated the crash throughout Saturday, reports Suffolk Live.

The photos taken at the scene show the red Ferrari with a completely crumpled bonnet, while another car has been flipped onto its side.

Police can be seen inspecting the crashed cars in the images shared by Suffolk Live.

Two squad cars appear to have blocked in the Ferrari.

The race car is in the middle of the road, while the flipped vehicle landed on the pavement outside a home and driveway.

Suffolk Constabulary was unable to confirm anything further than the fact that one person has been detained following the incident, and no members of the public were injured.

Last month, an unfortunate Ferrari driver crashed his £250,000 supercar on the same day he had bought it.

The brand new car only saw two miles on the road before its new owner promptly crashed it.

The Ferrari 488 was involved in a major collision in Derby on April 1.

Dramatic photos depict the expensive vehicle with a crumpled bonnet and significantly scratched.

Other than the hit to his pride, the unnamed driver did not suffer any injuries.

Derbyshire Roads Policing Unit wrote on Twitter: “Driver bought a Ferrari this morning and crashed it after driving it less than 2 miles. No injuries.”