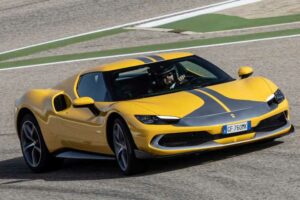 Ferrari CEO Benedetto Vigna is leading the company through an industry-wide transition. Electrification is quickly becoming the norm, and the automaker is preparing to launch its first fully electric model in 2025.

In a wide-ranging interview with Top Gear magazine, which is worth the read if you want to learn more about the man who kept car parts under his bed, Vigna said that the company’s first EV would be “unique, a true Ferrari.” Very little is known about the vehicle, with the automaker speaking in generalities when discussing the future model, as they tend to do with groundbreaking new cars.

What we have heard so far about the model sounds encouraging. In July, Vigna reassured enthusiasts that the extra weight of the all-electric powertrain would not detract from the EV’s spirited driving dynamics. He said during the CNBC interview that the automaker could manage the additional bulk. However, he didn’t divulge how. In the Top Gear interview, Vigna noted that Ferrari’s job is to combine tradition with innovation, adding, “We are working a lot to maintain the soul of the machine,” and pulling from years of expertise.

Earlier this year, a patent revealed one idea from the company for an electric or hybrid sports car. The filing revealed a design that used multiple battery packs, with a thin pack under the passenger compartment and a taller one behind it. It also isn’t the only patent Ferrari filed, with an earlier one depicting a car with a quad-motor setup.

Vigna brings a unique perspective to Ferrari. He previously worked at STMicroelectronics, leading its Analog, MEMS (Micro-electromechanical Systems), and Sensors Group. When Ferrari announced he would lead the company, the automaker said that his knowledge of the “technologies” driving the auto industry’s rapid changes would help strengthen the company.

The EV coming in 2025 is just one piece of a larger picture for Ferrari. The automaker wants fully electric vehicles to make up 40 percent of its models by 2030, with ICE-powered cars only making up 20 percent. Hybrids will fill in the rest, and Ferrari is well on its way to reaching its goal, with the electrified 296 GTB and SF90 Stradale already in the lineup.

While Ferrari’s most recent reveal, the not-an-SUV Purosangue, packs a mighty V12 under the hood, the automaker designed it to accommodate a hybrid powertrain. The automaker has 14 more cars to launch by 2026, including a new hypercar, and that’s a bright but challenging future to achieve.