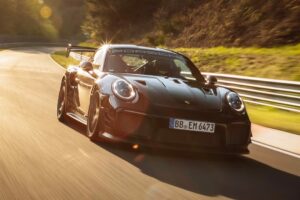 Germany's Nurburgring race track is worshipped by petrolheads around the world and many make the pilgrimage in their own cars on track days. But the appeal of the 'Green Hell' extends to manufacturers as well. New cars are often tested and developed on the Nordschliefe circuit with anything from supercars to hot hatchbacks aiming to topple a multitude Nurburgring lap records.

The 12.8-mile Nurburgring Nordschleife circuit features some of the most challenging stretches of tarmac in the world, and with almost 1,000 feet of elevation change as the track carves through a dense pine forest, squeezing every last tenth out of a flying lap is a task best reserved for elite drivers.

With the reputation of some performance cars relying heavily on 'Ring times, the Nurburgring lap time is a valuable currency in the eyes of car brands and consumers so we've seen various companies claim Nordschleife records for everything from the aforementioned hot hatches and SUVs to '4-door cars', estates and electric cars. The big one, of course is the Nurburgring production car lap record.

Whatever you think of this practice, the Nurburgring’s profile in the car world shows no sign of waning and we’ve got details of all the fastest cars of each type at the ‘Ring below…

Porsche smashed the overall lap record at the Ring with a time of 5:19.55 minutes in a 919 Hybrid Evo. The car is a development of the Le Mans prototype the German marque has raced competitively, and it hit a top speed of 229mph on its mind-blowing lap. The previous record, which had stood since 1983, was completed by Stefan Bellof in a Porsche 956 C which came in at 6:11.13 minutes.

Manufacturers such as SEAT, Renault, Volkswagen and Honda have been battling it out for years, and Renault regained the crown in 2019 with the Megane R.S. Trophy R (having previously set the front wheel-drive record in 2014 with a Megane 275 Trophy-R). The 296bhp hot hatch clocked a lap time of 7:40.1 seconds, beating the old record set by the FK8 Honda Civic Type R by more than three seconds.

The Trophy R is upgraded over the standard Megane R.S. with a freer-flowing Akrapovic exhaust system, Brembo brakes, new adjustable Ohlins suspension, lighter alloy wheels and a pair of carbon-backed Sabelt bucket seats. The rear seats have also been removed to help aid weight reduction. The Megane Trophy R is expensive for a hot hatch at around £50,000, but taking the Nurburgring record is an impressive way of showing its worth.

With SUVs stealing car sales from conventional family saloons, manufacturers are having to come up with exciting ways to attract buyers to more traditional saloon models. Which, amongst other things can include a fire-breathing, hell-raising performance version of the standard saloon.

The Jaguar XE SV Project 8 originally toppled the Alfa Romeo Giulia Quadrifoglio from the top of the saloon tables in 2017, with a time of 7:21.20. However, Jaguar went back for more in 2019 and the XE SV Project 8 managed to knock 2.8 seconds off its previous time, completing an incredible lap in 7:18.36.

The two-seater XE SV Project 8 does stretch the definition of 4-door production car somewhat, but that’s increasingly what’s needed to set a ‘Ring record these days.

More and more manufacturers are readying electric cars, and what better way to showcase you're serious about EVs than sending a bespoke, all-electric track special around the Nurburgring as fast as possible? That's exactly what Volkswagen did, setting a new lap record for all-electric cars with a Nurburgring spec version of the Pikes Peak hillclimb winning ID. R. The 617bhp, all-wheel-drive monster lapped the 12.9-mile circuit in 6:05.336, not only smashing the previous record held by Chinese EV maker NIO, but setting the second fastest ever unrestricted lap around the 'ring in the process. As for production electric cars, Tesla has claimed an unmodified Model S Plaid has lapped the 'ring in 7:30:909 with an average speed of 99.6mph – a very impressive time for a four-door saloon car.

The prominence of the front-wheel drive lap record may have risen in recent times, but the real kings of the ‘Ring are the machines challenging for the overall production car mark. These days, it’s never long after the covers have been pulled back off a new hypercar or extreme track weapon that the question of Nurburgring potential is asked…

Many people hoped the Dodge Viper ACR would crack the 7-minute mark having set a time of 7:12.13 with its 2010 edition of the car, but alas it narrowly missed out. However, its consolation prize is that it remains the fastest manual production car to lap the ‘Ring, which a fairly major accolade amongst petrolheads. It packs an 8.4-litre V10 producing 645bhp and 813Nm of torque, which secures some bragging rights.

The 488 Pista has impressive power and plenty of trick technology to help it storm around any track. Its 3.9-litre twin-turbo V8 produces 710bhp and 770Nm of torque, while the car itself weighs just 1,385kg. That’s 90kg less than the conventional 488 – a vehicle that could hardly be called heavy.

The Pista’s figures sound potent, then, and they are; the 0-62mph dash now takes a ludicrous 2.85 seconds, and the top speed is in excess of 211mph.

Lamborghini is famed for its outrageous supercars, so when the Italian brand applies its ‘Super Veloce’ SV treatment to the already ridiculously potent Aventador flagship, you know the results are going to be magnificent.

‘Super Veloce’ translates from Italian as ‘super fast’, so this 217mph wedge sets its stall out straight away. It has the muscle to live up to the name, too, as lurking beneath that slatted carbon fibre engine cover is a 6.5-litre V12 producing 740bhp.

That’s 50bhp more than the standard car, and together with a higher rev limit and a reprogrammed version of Lambo’s seven-speed single-clutch gearbox, it means the 0-62mph time is down to 2.8 seconds, helped by massive four-wheel drive traction off the line.

While McLaren was being unusually coy about the Nurburgring lapping prowess of its P1 hybrid hypercar (it will only say that the P1 has done a sub 7-minute lap), Porsche rocked up and clocked a 6:57s lap in its 918 Spyder, albeit one benefitting from Porsche’s Weissach Package. It's the first – and so far only – of the 'Big Three' to post an official time, giving the LaFerrari and P1 something to aim for.

With a combined 875bhp and 944lb ft of torque from its petrol-electric powertrain, the all-wheel-drive machine blitzed the ‘Ring in September 2013, holding the outright production record until the arrival of the Lamborghini Huracan Performante.

The Weissach Pack helps to reduce overall weight by 30kg (from a claimed 1,430kg), by including a carbon fibre roof, magnesium wheels and a titanium roll cage.

Ahead of its big reveal at the Geneva Motor Show, Lamborghini released footage of its new, track-focused Huracan Performante tearing round the ‘Green Hell’ in an astonishing time of 6:52.01s. Shrouded in a camouflage wrap, the 5.2-litre V10 powered beast was piloted by test driver Marco Mapelli, who surely gained a handsome bonus on his paycheck at the end of the month. Worth every penny.

Porsche said it was targeting a lap time in the region of 7:05s when it first conceived the 911 GT2 RS. But it absolutely smashed that figure, and knocked the Lamborghini Huracan Performante off its perch with a blistering record run of 6:47.3 at the hands of test driver Lars Kern in late 2017.

The standard Porsche 911 GT2 RS completed the lap on Michelin Pilot Cup 2 tyres, and although these were developed specifically for this model, they are both road legal and standard for the production car.

Having seen the Huracan Performante dethroned in September 2017, Lamborghini took less than a year to reclaim the lap record at the Nurburgring. This time they snatched it with the Aventador SVJ, which lowered the benchmark to a 6:44.97s – more than two seconds faster than the GT2 RS – thanks to its 760bhp version of Lambo’s 6.5-litre V12.

The mighty Aventador SVJ is based on the Aventador SV, which itself has lapped the Nurburgring in under seven minutes, hitting 6:59.73s in 2015. Porsche, the ball is back in your court…

The Black Series is the most focused and powerful evolution of the Mercedes-AMG GT with extra aerodynamic downforce to help the uprated twin-turbocharged 4.0-litre V8 put down its 720bhp.

Mercedes says all of the components fitted to the lap-setting car can be fitted to the road car, but AMG engineers were on hand to adjust the aero and chassis settings to optimise the Black Series for the particular strains that the Green Hell places on a car. Given the Black Series moniker usually denotes the most extreme performance version of an AMG Mercedes, this record is unlikely to be topped by an even more powerful AMG GT but who knows, Mercedes could bring it back for another go.

Porsche is no stranger to setting lap records at the Nurburgring. The German manufacturer currently holds the outright lap record with its monstrous 919 Hybrid setting a scarcely believable time of 5:19:55s. Porsche and tuning company Manthey-Racing have previously set a blistering 6:40 lap time around the 'Ring, but although that car was road-legal, the specification it ran to complete that lap time was for track-use only. So, Porsche, Manthey-Racing and development driver and racer Lars Kern gave it another go with another tuned 911 GT2 RS and ended up beating the production car record with a 6:43.300.

If you thought the above top ten was a definitive, indisputable list, we have some bad news: plenty of other cars have set lap times which would see them break into the top ten times, but have fallen into somewhat of an automotive grey area. Should a time count if it’s set on special tyres? Should track cars be included? What about prototypes of forthcoming models? The inclusion of the following is up for debate…

Elon Musk claimed in September 2021 that an unmodified Tesla Model S Plaid managed to lap the Nurburgring in 7:30:909. The Plaid model has an astonishing 1,006bhp so you might question why it wasn't faster, but let's remember this is a big, hefty four-door saloon so to get within a second of another hugely powerful four-door saloon – the BMW M5 CS (which is admittedly a lot more track-focused) is something the Tesla can be proud of.

The 450bhp V8-engined Radical SR8 stretches the definition of a ‘road-legal production car’ with its 690bhp per tonne power to weight ratio. So although we've left it out of our official top ten, it's still worth a mention.

It looks like a race car and you certainly (we hope) wouldn’t attempt to use one on the school run. With approval it's possible to register one as a road legal vehicle, and it completed an incredible 6:48s lap in 2009 to install itself in the Nurburgring lap record tree.

The all-electric NextEV NIO EP9 set what looked like a lap record on the Nurburgring racetrack with an incredible time of 6:45.9, however it later transpired that this was done on bespoke tyres, which is why it doesn't feature in the main list.

But as a road-going adaptation of a track-only car, we’ve decided to leave it out of our top ten, while accepting that it’s position is very much open for debate.

Like the McLaren P1 LM above, this entry also causes some controversy. Unlike the standard Porsche 911 GT2 RS in our top ten list, this version has been specifically modified to tackle the Nürburgring very quickly. It is a road legal vehicle, but it contains additional performance parts from Manthey-Racing that give it an edge over the standard production car. Plus, while you can buy the car, it can only be used for track days in that form.

On top of the Manthey-Racing parts, the GT2 RS MR also had aerodynamic and chassis adjustments for its record-breaking run.