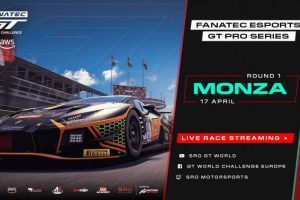 The Fanatec Esports GT Pro Series, the first ever virtual championship that will contribute points towards a real-life racing series, will get underway this weekend with a star-studded entry list.

Corresponding to the first race of the Fanatec GT World Challenge Europe Endurance Cup this season, all of this weekend’s racing action takes place at the famous Monza circuit in Italy. It’s actually where the real-world series first started, a decade ago, and the event organizers will no doubt be hoping that the virtual component becomes just as established.

While the drivers will be taking to the high-speed course for a three-hour endurance race on Sunday, the first points on the board for the overall Fanatec GT World Challenge Europe title race will come from the virtual event. Each of the teams entered in either the Pro or Silver Cup (which is only open to Silver-graded drivers) must nominate one driver for Saturday’s hour-long digital equivalent in Assetto Corsa Competizione.

Regular esports viewers will be looking at Ben Barnicoat, who finished second overall among the pros in last year’s SRO E-Sports GT Series, but he’ll have his work cut out for him against GT Academy champion Ricardo Sanchez. Sanchez is racing in the Silver Cup for the Haupt Racing Mercedes team this year, and is unsurprisingly the team’s nominated esports driver.

The race itself will be a one-hour, solo driver event with a compulsory pit stop, and a qualifying session beforehand. Each of the participants will drive their own real world car, set up as they wish — with additional input from sim-racing specialist Coach Dave Academy — in their own Fanatec driving rig, set up in the dedicated Fanatec Arena at the circuit.

There’s a ten-minute pit-stop window between 25 and 35 minutes into the race, and each driver must stop during this window and take on at least a liter of fuel; tire changes are optional. Live stewards will review any racing incidents and dole out any necessary penalties.

At the end of the race, the top three finishers will gain three, two, and one point respectively towards their overall GT World Challenge Europe tally, which combines the points from the Endurance Cup and Sprint Cup as well to determine a champion. With five races in the virtual series, that means up to 15 points are available for a perfect season.

The racing action gets underway at 1640 UTC on Saturday April 17, and will be available on the SRO’s Twitch and Facebook accounts, as well as on the Youtube stream below: