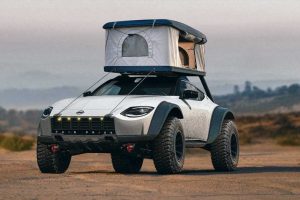 Probably won’t happen but who knows?

It has been two weeks since we’ve seen the successor to the Nissan 370Z, the Z Proto. While the Nissan Z Proto is a design study of a prototype, the Japanese automaker has confirmed that we’re pretty much looking at the real thing. We’re sure a lot of you have something to say about that, but it is what it is.

Inevitably, fans started to publish their take on the Nissan Z Proto’s design. From an SUV rendering to a roadster, and to a white Nismo version, we’ve seen many versions of the next-generation Z car in a fictional world. The latest of which is this – a safari-ready Z Proto done by Rain Prisk.

Taking the Z Proto’s minimal curves and sleek silhouette then using them to create a monstrous vehicle, we couldn’t help but appreciate how tasteful this fan rendering was made. The extended flairs are expected, but not the roof-mounted tent. That’s a cool touch, as are the front skid plates with tow hooks.

And yes, the rectangular source of contention gets several light fixtures, which made the Z Proto safari look like it’s going to devour someone. We’ll leave that one for your judgment.

We’ll probably not see this off-roading Nissan Z car in the real world, but keep in mind that it isn’t entirely impossible. We’ve seen coupes and roadsters getting this treatment in real life, like the Safari Porsche 911 by Kelly-Moss Road and Race and Tate Morgan’s wild Mazda Miata off-roader.

No one knows what the future brings. Maybe this safari Nissan Z will reach fruition once the production vehicle goes on sale. With a sheer number of aftermarket geniuses out there, that isn’t far-fetched at all.