F44 BMW 2 Series Gran Coupe spotted on a trailer in Malaysia – 218i M Sport variant to be launched soon? – paultan.org 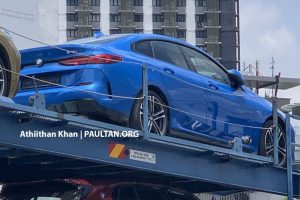 It looks like the F44 BMW 2 Series Gran Coupe will be the next model to be introduced by BMW Malaysia, as an example of the C118 Mercedes-Benz CLA rival has been spotted on a trailer by paultan.org reader Athiithan Khan.

Based on the same front-wheel drive architecture (FAAR) as the latest F40 1 Series, which was launched here back in July, the 2 GC celebrated its global premiere back in October 2019, and has since made its way to Singapore and Thailand. The 2 GC also comes in a hotter M235i xDrive variant, which uses a more powerful B48 2.0 litre unit that makes 306 PS (302 hp) and 450 Nm, with an eight-speed Steptronic Sport automatic transmission. This combo is good for a century sprint time of 4.9 seconds and 250 km/h top speed, although it isn’t certain if we will get this option – it is offered in Singapore.

As the variant name suggests, the M Sport package will come as standard, which consists of sportier bumpers, chrome trim on the grille and likely M Sport suspension as well. The wheels fitted to the car seen on the trailer are 18-inch double-spoke style 819 M alloys, while the paint finish appears to be Misano Blue.

No shots of the interior for obvious reasons, but the 2 GC is pretty much identical the 1 Series and can be equipped with BMW Live Cockpit Professional system, which sees BMW Operating System 7.0 powering two 10.25-inch displays. Despite its shared platform with the 1 Series, the 2 GC is anything but a hatchback with a boot tacked on. Instead, the bodywork has a style of its own, with a sleek and low-slung roofline that ends in a fastback-like rear, paired with frameless windows for extra flair. Elsewhere, the conjoined front kidney grille is flanked by angular headlamps, while the slim taillights around back echoes the G02 X4.

It isn’t certain when the 2 GC will make its official launch debut here, but when it does, it will offer buyers looking for a compact four-door coupe a more affordable but less performance-focused alternative to the CLA, which is only offered here in CLA 45 S 4Matic+ guise that is priced beyond RM400k. Interested?