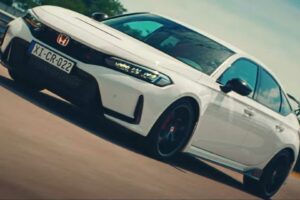 Honda had a metered rollout of the all-new 2023 Civic Type R over the summer. The model broke cover in July, but we didn’t learn about its performance specs until late last month. The car is still weeks away from launching, but 2021 Formula 1 World Champion Max Verstappen got some track time with the Type R in a new video from the Honda Australia YouTube channel.

The video opens with Verstappen learning that he has a few free hours in his otherwise packed schedule. He takes the opportunity to get some seat time with the new Honda at the Euro-Ring Circuit in Hungary. He only has so much time with the car, pitting Verstappen and the Civic against an imaginary clock.

Verstappen rockets around the race track, but he slows down when he learns he’s not being timed. It’s a cutesy clip that makes the Civic Type R look exciting to drive on the track.

The new Civic Type R is the most powerful version ever from the factory. It packs a turbocharged 2.0-liter four-cylinder engine that produces 315 horsepower (235 kilowatts) and 310 pound-feet (420 Newton-meters) of torque. Those numbers increase by 9 and 15, respectively, compared to the previous-generation model.

We don’t know how those numbers translate into 0-60 times or other performance metrics, but Honda did reveal that the car is also quicker around the Suzuka circuit. Every Type R comes with a six-speed manual gearbox.

There are still other tidbits Honda hasn’t revealed, like the curb weight, but we expect the automaker to release more information closer to when the car goes on sale. The car will officially launch sometime this fall, and we hope we learn everything about it before that happens.

Honda hasn’t even released pricing information for the model. However, we know it’ll launch with five available colors – Championship White, Rallye Red, Crystal Black Pearl, Sonic Grey Pearl, and Boost Blue. The previous Type R started at around $38,000, and we wouldn’t be surprised if the new Type R received a slight price increase.