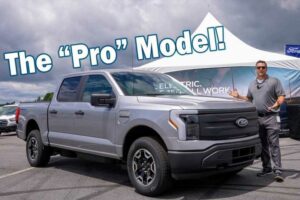 Whenever we get to see an upcoming model, it’s typically the top-of-the-line trim level with all the extras. The automaker touts the vehicle’s amazing performance and features, though they’re not necessarily the same in the base model. This is the case with most cars, and precisely the case with the 2022 Ford F-150 Lightning.

While it’s great to see every possible feature a new EV has to offer, many shoppers are also just as interested in how well-equipped the base model comes. How much range does it have? What is its performance like in comparison to the range-topping trim?

This recent video about the Ford Lightning is unique in that it checks out the $39,000 base “Pro” model. The cheaper model is likely the one that many gas-powered pickup truck drivers may consider due in part to its lower price.

The video gives us a detailed look at the Lightning Pro inside and out. In addition, there’s a brief test ride, complete with some agility testing through a cone course in a parking lot.

The Pro does have a nice, more traditional horizontal screen in the dash that should suffice for most drivers. And, while the electric truck is much plainer and simpler than the high-end version we’ve seen, that doesn’t mean it won’t appeal to the masses. Sure, some folks will pay $90,000 for an electric pickup truck, but we imagine Ford is going to end up selling a whole lot more of the entry-level and mid-level versions.

Check out the video, and then let us know what you think of the Lightning Pro model. Would you go with the base?