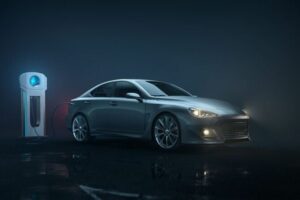 Quentin Willson, an ex-Top Gear presenter and the ambassador of FairCharge, told Express.co.uk that the overall costs of running an electric car are much cheaper than those of a combustion car. The TV presenter also claimed that the second-hand values of EVs are going up.

As the significant and detrimental effects of climate change loom, paired with the current fuel crisis raising prices of petrol and diesel to record highs, the UK public is increasingly turning to alternative methods of transport – and this includes a swift migration to electric cars.

Research carried out by Next Green Car showed a growth of 74 percent in registered electric cars since 2020.

On top of that, the number of electric vehicles bought in the UK in March alone was higher than during the entirety of 2019.

This in turn made March’s figures the highest on record for a single month.

When asked about the data, Mr Willson said that he is not surprised as the overall costs of running an EV are much cheaper compared to combustion cars.

The TV presenter added: “The overall cost of ownership, say I don’t know, over four years is significantly less than the one of a combustion car.

“We’ve also got data that shows that electric cars are 20 percent more likely to pass their MOT than diesel and petrol cars because they’ve got no emission kit on and stuff like that.”

DON’T MISS
Speeding offences named as the most common car crime [REVEAL]
Cyclist hits out at driver who braked and injured him [SHOCKING]
Warm weather driving habits could land drivers with fines up to £5,000 [WARNING]

Mr Willson also highlighted that the second-hand values of electric vehicles are going up.

He said: “That has a benefit in terms of your re-sale price.”

He continued: “It’s not factually accurate now to say that it’s more expensive to run an electric car because it’s actually not.

“If you’ve taken all these costs, the zero maintenance, zero fuel, the zero road tax, the very limited appreciation, and the fact that you’ll pass MOTs better, those total costs are now less than the combustion car.“