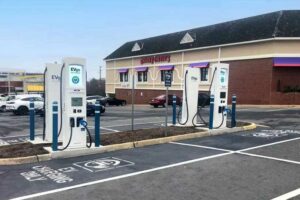 EVgo, one of the largest electric vehicle public charging networks in the U.S., announced recently that power being dispensed now exceeds pre-COVID-19 levels.

That’s good news, although it also tells us that it takes a lot of time to return to the levels from 2019/2020 (despite new EV sales, more users, and new charging stations).

“This trend is consistent with data related to retail, travel, and automotive sector activity, and is a welcome sign of recovery as we emerge from the pandemic.”

A big part of that is the switch to working from home and fewer driving needs. According to the DOE’s Office of Energy Efficiency & Renewable Energy, the number of workers who work from home grew from 20% to 71% in 2020.

Since 2010, EVgo has installed more than 800 fast-charging locations in more than 65 metropolitan areas across 34 states.

The network is currently in a phase of fast expansion, including installations of the first stations under the partnership with General Motors (more than 2,700 chargers by the end of 2025).

EVgo is now also more accessible to Tesla drivers, as the company is adding Tesla proprietary connectors at its chargers (the plan is to equip more than 400 existing chargers, plus 200 new). The interesting thing is that the chargers are still using the Tesla-CHAdeMO adapter, but inside the charger.

Other expansion projects announced this year are: partnership with Meijer, grants to support the development of new fast chargers in New Jersey and Pennsylvania and partnership with Nissan:

“Announced that the Nissan Energy Perks by EVgo program, a partnership between EVgo and Nissan to build and promote fast charging stations across the country, reached 6,000 members in March and recently celebrated the opening of public fast chargers supported by the partnership in Washington, D.C. and Maryland.”